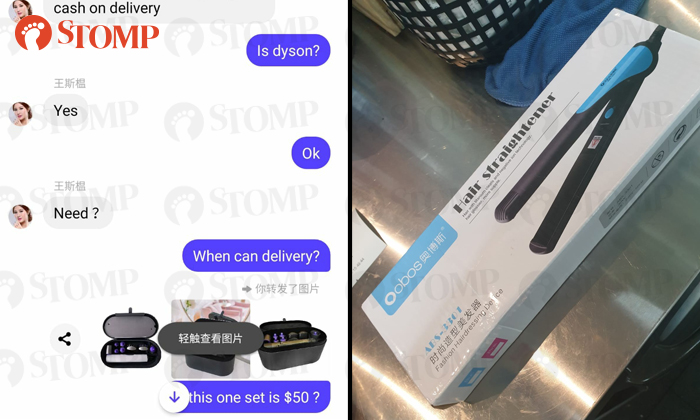 A woman thought she had found a good deal when she saw a curling iron, supposedly from Dyson, on sale for $50 — only to realise that she had fallen for a scam.

Stomper G said her friend saw a Dyson curling iron for sale on a Facebook listing.

When G's friend enquired about the product, the seller told her that it cost $50 including shipping and that the payment mode was cash on delivery.

The Gift Edition Dyson Airwrap styler (as seen above in pictures that the seller sent to the buyer) retails for $699. The Dyson Corrale Straightener also retails for the same price.

G said: "When the package arrived via courier, the deliveryman collected $50 and left.

"After opening the package, to my friend's horror, the item was not from Dyson.

"It was a hair straightener from some cheap Chinese brand that you can easily get for $10. The product was flimsy and the packaging was squashed at the corners as well.

"The product was so different from what the seller sent to my friend."

G's friend then contacted the seller, but realised she had been blocked.

She also called the deliveryman, who said he was merely delivering the package and could not do anything.

G added: "I am sharing this on behalf of my friend as she only speaks Chinese and is not sure how to reach out for help, especially after being blocked.

"She is very lost, confused and helpless. She is not earning much. In fact, $50 is a huge sum for her as it's her whole day's worth of salary.

"This has been a terrible experience."

According to G, the courier company has since given her friend a refund and were "efficient in replying to queries."

Related Stories
Woman buys $98 water spray gun, receives just a photo of it in 'most ridiculous purchase online'
Shopper buys $66 'I PID' tablet as Christmas present, shocked to get children's toy
Buyer pays $350 for 'luxury' items, gets blocked after asking seller why they are counterfeit
More About:
online shopping
expectations vs reality
scam