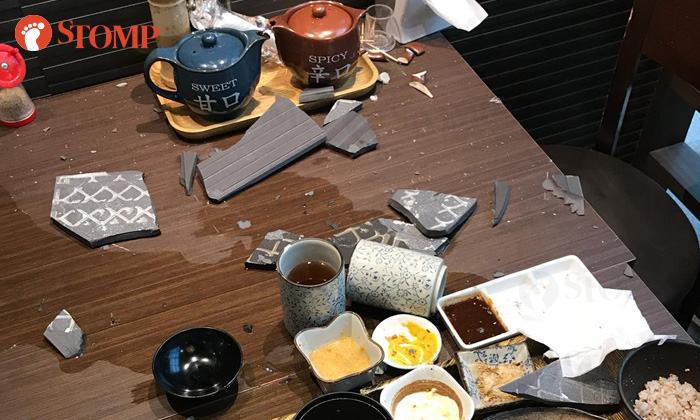 A ceramic tile fell onto a diner's table at Tonkatsu by Mai Maison restaurant in Westgate mall at Jurong East at about 5pm yesterday (Sep 16).

Stomper Daniel alerted us to the incident via WhatsApp.

According to him, he had just finished a meal with his girlfriend and had went to the counter to pay the bill while his girlfriend remained seated at the table.

He then heard a loud shatter and a scream from his girlfriend.

When he went back to check on his girlfriend, he found that there were sharp pieces of grey tile all over the dining table.

From the video, it appeared that the tile had fallen from the wall right above where the couple was sitting.

"I saw shattered and sharp fragments of grey tile all over our dining table and our belongings," said Daniel to Stomp in a phone interview.

"Luckily, my girlfriend was not physically hurt in this event.

"If she had taken the corner seat, she could have ended up with serious injuries.

"Other customers in the restaurant and passers-by were equally shocked as the shatter was so loud that it drew a large crowd."

In response to a media query from Stomp, a spokesperson for Tonkatsu by Mai Maison said: "We are deeply sorry and have apologised to the customers for the incident.

"Although no one was injured in the incident, we are now still in communication with them to see if there is anything else we can do.

"Meanwhile we have inspected the entire outlet to make sure that there are no more loose tiles and cordoned off the affected area until the problem is fully rectified by our contractor.

"We will be removing all the tiles and replacing them with paint.

"As again, we are deeply saddened and regretful over this unfortunate incident and we assure our valued customers that this will not happen again."

Related Stories
Floor tiles crack and pop out at lobby of Choa Chu Kang Crescent block
Tiles 'pop out' in HDB flats at multiple estates in S'pore, 'fall apart' at Toa Payoh
Family forced to run out of HDB flat after kitchen tiles crack in the middle of night
More About:
tiles
dangerous