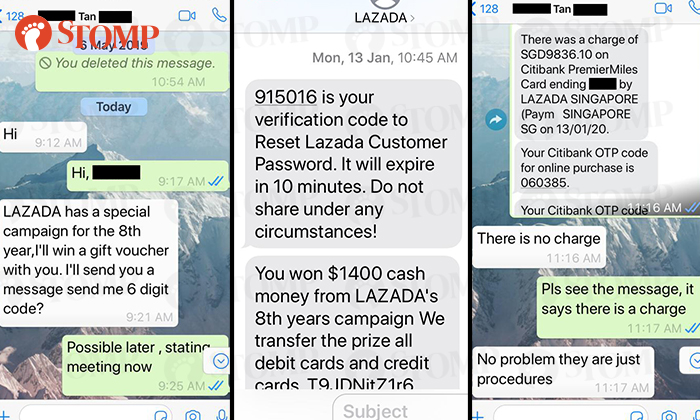 A 55-year-old saleswoman lost over $18,000 when she thought she was helping her friend win gift vouchers from Lazada.

A Stomper shared that this happened to her friend, H.

At about 9am on Jan 13, she received a WhatsApp message from a friend Doreen Tan, who is a health product consultant she had not been in contact with since 2018.

Tan informed H that Lazada was having a special campaign where they could win a gift voucher together. She also said that she would send H a six-digit code.

It is unclear if Tan's WhatsApp account had been hacked.

A screenshot of this message shows that it was sent from "WhatsApp" in a foreign language. 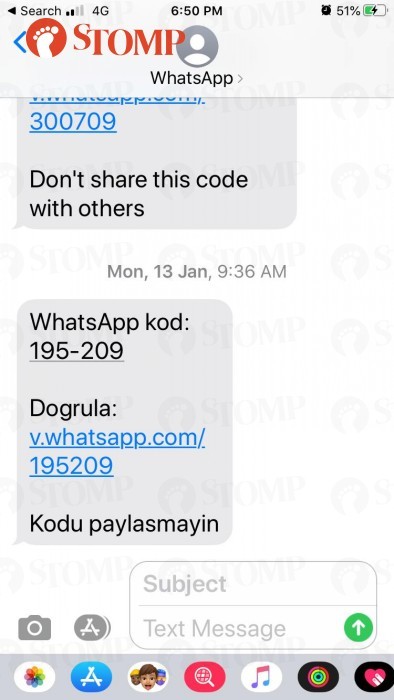 Google Translate detected that the words "kod", "dogrula" and "kodu paylasmayin" are Turkish, which respectively mean: "code", "to verify" and "don't share the code".

At 10.46am, H received a message from Lazada regarding a verification code that was meant to reset her "Lazada Customer Password".

H also sent a screenshot of this message to Tan.

Instead of a gift voucher, H then got a message from Lazada saying that she won $1,400 cash money from Lazada's eight years campaign and the money would be transferred via her debit/credit card. 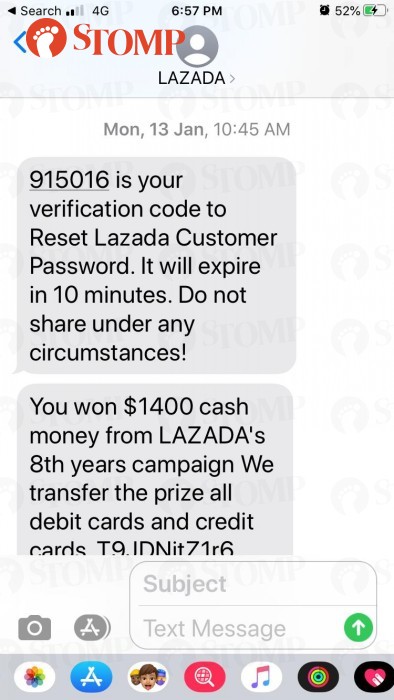 After some "congratulations" were exchanged, Tan said that she had "won before".

Tan then instructed H to send photos of the front and back of her credit card, where she also got ahold of the three-digit CVV code.

H started getting messages of one-time pins (OTP) for online purchases that she also shared with Tan, to which Tan assured her that there was "no purchase."

At 11.02am, H got a message from Citibank that there were two charges by Lazada on her credit card, each amounting to $9836.10.

When H asked Tan about this, the latter said this was the procedure where she would have $98 credited to her account for each OTP.

She even told H that "if any charge happen, I pay you."

At 12.07pm, H's suspicions arose and she found out that there was no such campaign when she visited Lazada's website.

She stopped replying Tan and checked with Citibank. That was when she saw the two charges.

She called the bank and requested to stop the card and cancel the transactions.

The Stomper said: "The bank told H they could cancel the card but not the transactions since they've been authorised with OTPs."

Tan pressed H for more OTPs while she was checking with the bank and told Tan to wait.

H then noticed that Tan's profile photo was gone. Messages sent by Tan had also been deleted.

"I told H that we could share this with Stomp so people would be alerted to this," said the Stomper.

"If a friend texts you about something like this, please make a phone call and don't just communicate through text. Speak to them.

"H is embarrassed that she made this mistake. She almost cried while talking to me about it."

Responding to a Stomp query, the police confirmed that a report was lodged and investigations are ongoing.

The police published an advisory in a Facebook post on May 14, 2019 about how several victims were contacted by scammers via Instagram and were cheated of at least $14,000 due to fake Lazada campaigns that offered prizes.

These scammers impersonated as the victims' friends or Instagram followers, asked victims for their contact numbers and photos of their credit/debit cards on the pretext of helping them sign up for the fake campaign.

Victims were told to share OTPs of their bank accounts and only realised they were cheated after discovering unauthorised card transactions on their accounts.

Stomp has reached out to Lazada for more information.

Related Stories
Police investigating after man pays $500 for 2 sets of AirPods -- only for seller to go MIA
Widow left with $99 after life savings of over $54k wiped out in Viber scam, police investigating
Message regarding fast-approval loans not from DBS or POSB, says spokesman
More About:
scam