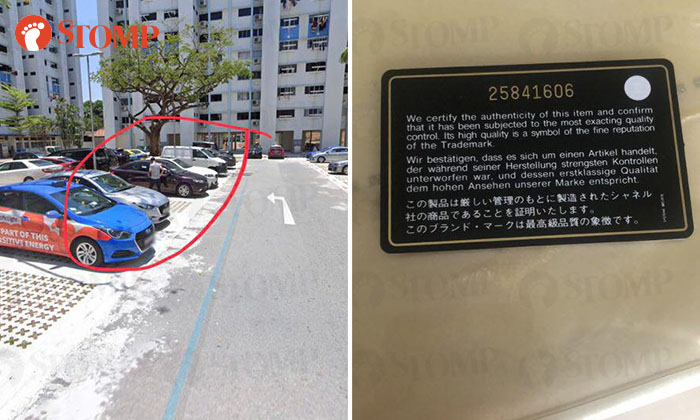 A Stomper is looking for her Chanel wallet, which has been missing since June 24, when she left it in her car that was parked at an open carpark at 114 Bukit Purmei.

She told Stomp that the wallet contains her identification card (IC), a Passion card and some debit and credit cards.

She also shared photos and videos of the carpark where her wallet went missing at.

The video shows carpark lots near where her car was parked.

"I realised that my wallet was missing when I reached my next destination 45 minutes later.

"Then, I asked my friend who stays nearby, to go back and search. Nothing was found at the last location I parked at," the Stomper said.

She told Stomp: "What I ask is for them to return my IC. They can keep the wallet.

"My hubby forgot to lock the door while he was away from the car, that's why I'm not sure if it was stolen by a thief?

"I can offer a reward.

"I hope that car owners who parked at the carpark between Block 112 and Block 114 Bukit Purmei on June 24 between 6pm and 10pm would have video recordings of the finder."

She added that she 'forgot to ask any of the people who parked there due to her panicking.'

She also shared about her lost wallet on a Facebook page, Singapore Lost and Found.

Related Stories
Woman loses wallet with $5,000 at Downtown East -- then finds it torn and empty in drain nearby
Found: Man looking for wallet lost at Outram Park station
Is this your wallet found at Yishun Ring Rd?
More About:
lost
lost wallet
wallet