Woman killed in Jurong accident: Video shows her jaywalking and getting run over by van 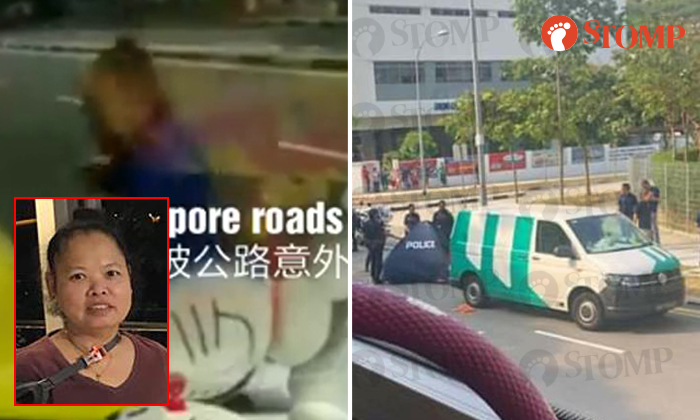 A pedestrian who died in an accident in Jurong on Thursday afternoon (Aug 15) had apparently been jaywalking when she was hit by a van, according to a video that has been circulating online.

It was earlier reported by Stomp that the accident took place at the junction of Ho Ching Road and Corporation Drive, at around 3.24pm.

The 54-year-old woman was pronounced dead by paramedics at the scene while the 33-year-old van driver was arrested for causing death by a negligent act.

She had been on her off day and was buying something for her mother when the tragedy occurred.

Footage captured by the van's dashboard camera was posted on Facebook and shows how the fatal accident happened.

In the video, the van can be seen slowing down at the junction. The driver is believed to have been checking for oncoming traffic from the right, reported Wanbao.

Meanwhile, Ms Hong, who was holding a bag of fruits and an umbrella in each hand, is seen jaywalking across the road.

The van driver made a left turn after confirming that traffic was clear on the right, but apparently did not notice Ms Hong.

According to Wanbao, Ms Hong is believed to have continued crossing the road because she apparently thought that the van driver had noticed her and would stop.

The van then struck Ms Hong and ran over her.

Related Stories
54-year-old woman dies in accident with van at Jurong, driver arrested
Elderly pedestrian dies after getting run over by truck: 'I heard a scream and cracking sound'
62-year-old pedestrian dies from head injuries after being hit by car and sent flying 5m
More About:
accident
fatal accident
van
pedestrian
dead
death