Woman killed in Ang Mo Kio accident was hit by several vehicles, but only cabby stayed at scene 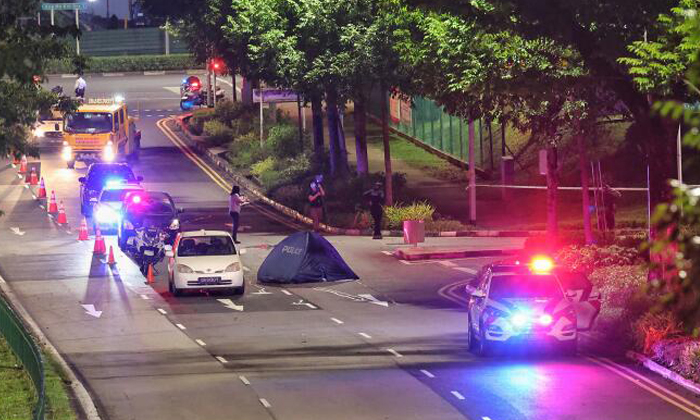 The woman killed in an accident in Ang Mo Kio was hit by several vehicles, including a Tower Transit bus and a Trans-Cab taxi.

They had earlier described the accident as involving a pedestrian and a taxi, but investigations showed multiple vehicles were actually involved.

The accident happened at about 10.25pm on Monday along Ang Mo Kio Street 21.

The 61-year-old woman was pronounced dead at the scene by a Singapore Civil Defence Force paramedic.

Although several vehicles were involved, only the Trans-Cab driver remained at the site.

The 67-year-old male cabby and another 58-year-old man, who was driving a private car, are assisting in police investigations.

Chinese evening daily Shin Min Daily News reported that the victim was dragged a distance after she was hit.

A pool of blood could be seen about 20m away from the police tent covering her body on Monday night.

Police said it has not been established which vehicle collided with the woman first.

But The Straits Times understands that when the police arrived, only the cabby was at the scene.

The taxi is believed to have collided with the woman, travelled a distance before the driver made a U-turn when he realised he had hit someone.

The cabby was spotted in distress at the scene, and his family members had to be called in to calm him down.

Investigators later tracked down the other drivers, leading to the arrest of the bus driver at another location.

A Tower Transit spokesman confirmed that one of its buses plying the bus service 169 route was involved in the accident.

"The bus captain involved has been suspended and is assisting with the police investigation," he said.

"Tower Transit Singapore has reached out to the deceased's family to offer our unreserved apologies and condolences, and to render assistance."

Ms Jasmine Tan, general manager of Trans-Cab, told ST that the cabby had reported the incident to the company on Tuesday.

"We are deeply sorry that this has happened, and our insurance loss adjusters are trying to get in touch with the next of kin to offer our condolences and assistance," she said.

"Meanwhile, we will be assisting the police in their investigations."

Under the Road Traffic Act, those convicted of causing death by driving without due care may be jailed for up to three years and fined up to $10,000.

Those convicted of failing to stop in the case of an accident causing death may be jailed for up to a year and fined $3,000, and disqualified from driving for at least a year.