Woman keeps scolding and yelling at helper to hail cab: "Just put your hand out... before I throw you here!" 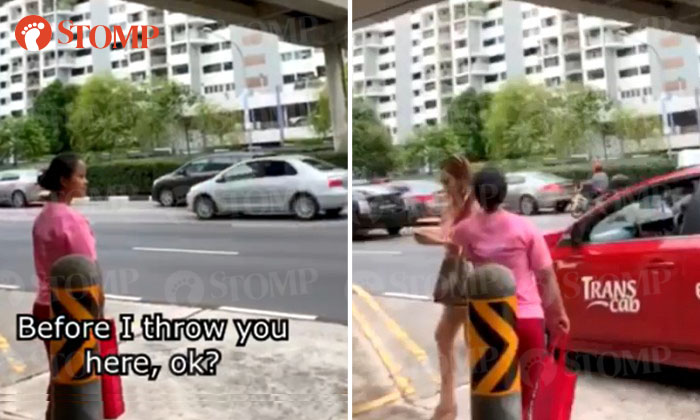 A woman was caught on video shouting and scolding her helper to flag a taxi down at Farrer Road MRT Station at 6.30pm yesterday (Oct 11).

Stomper M, captured the video of the incident, subtitled it and sent it to Stomp.

When we reached out to Stomper M, she said: "I was waiting for my ride home when I heard the woman yelling at her helper.

"They were at the taxi stand before me, so I'm not sure how long they had been waiting for a taxi."

In the video, it appears to be drizzling.

The video started with the employer, in a pink top and pink shorts, shouting at her helper: "The wind is blowing. If not, I don't need you to do, ok?"

The helper tries to flag a cab down when her employer said: "I hate it when you argue with me. Just do what I tell you to do."

After struggling to get a cab, the employer said: "Sibei suay si" which translates to 'very unlucky' in English.

"Normally got taxi one, but today no taxi," she adds.

The employer seems to see a taxi and tells her maid to flag it down.

"Coming already one! Can you put your hand out? The green one. Oh my god," she exclaims.

The helper looks at her employer before putting her hand out.

A red Trans-Cab taxi stops for them.

They ask the driver if he can take them to Hougang but he declines and drives away.

At that point in the video, the helper looks at her employer and seems to have said something.

Her employer replied: "You don't ask me so much. You just put your hand out for a taxi can or not? Before I throw you here, ok?"

Her employer seems to spot another cab and said: "Yellow one, yellow one."

The helper puts her hand out to flag down the cab approaching.

The yellow ComfortDelGro taxi stops for them.

The helper opens the front door for her employer to get in.

The video ends with the helper getting the backseat and the cab driving off.

Stomper M added: "I was shocked when the woman started yelling at her maid.

"It seems that the maid was unable to differentiate between cars and taxis on the road so she was unsure when to flag for the taxi."

Related Stories
Maid nearly blinded by employer who repeatedly assaulted her, forced to work without pay for 2 years
Maid falls 4 storeys from Bishan block, says she does not remember what happened
Maid who hit elderly stroke patient gets sent away, employer 'pretended not to know about video'
More About:
maid
shouting