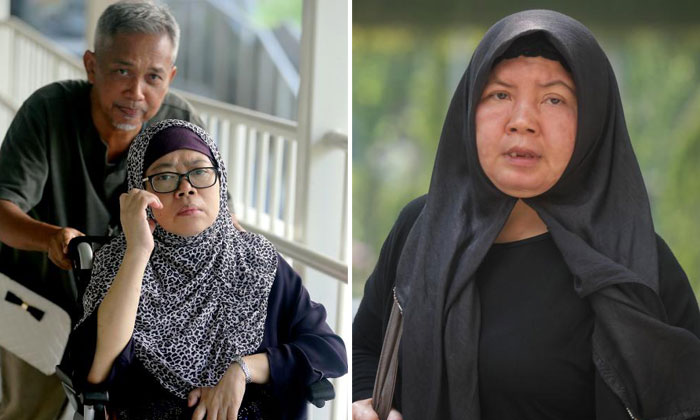 A woman who used an array of household items – such as a hammer, chopper, bamboo pole and stone pestle or pounder – to hit her Indonesian maid, causing permanent disfiguration, was on Thursday (Aug 1) jailed for 11 years. This is believed to be the longest sentence for maid abuse.

Zariah Mohd Ali, 58, was also ordered to compensate the victim with a sum of nearly $56,000 or serve an additional five months in jail.

Her husband Mohamad Dahlan, 60, was sentenced to 15 months’ jail for his role in the abuse, and told to pay the maid $1,000 or serve an additional five days’ jail.

The couple, who were previously convicted for abuse of another domestic worker in 2001, are appealing.

The prosecution had called this one of the worst cases of maid abuse in Singapore.

Zariah in 2017 was found guilty of 12 charges, which included hitting the back of the maid's head and her mouth with a hammer, striking her left ear with a bamboo pole, hitting her forehead with a pestle, stabbing her shoulder with a pair of scissors, slashing her forearm with a chopper, and forcefully pushing her left little finger backwards until it broke.

Her security guard husband was convicted of a single charge of hitting the maid, who was 32 years old at the time, on the head with the cover of a frying pan at their Woodlands flat some time between June and December 2012.

In November 2011, Ms Khanifah arrived in Singapore from a village in Indramayu, West Java, to work as a maid for the couple.

The abuse, which lasted for about half a year, left Ms Khanifah with a deformed left ear, permanent and prominent scars on her forehead, at the back of her head and across her shoulders, and a left little finger that is functionally impaired.

Deputy Public Prosecutor Tan Wen Hsien asked District Judge Luke Tan to sentence Zariah to at least 13 years’ jail and Mohamad to at least 18 months’ jail for the "horrific abuse" that they inflicted on Ms Khanifah.

"This is indubitably one of the worst cases of maid abuse in Singapore’s recent history... A strong message must be sent out that such treatment of domestic workers within the home cannot be tolerated by the courts," said DPP Tan.

She added that the victim not only suffered physically, but psychologically too, through the "reign of terror" that Zariah instituted to “reinforce her power and control over the victim, and to bully and oppress her into submission".

Some of the other things Zariah did included not allowing Ms Khanifah to call home or use the phone, and barring her from speaking to the neighbours.

Ms Khanifah was also made to stay in the kitchen toilet whenever visitors came to the flat.

As a result, significant psychological harm was inflicted on her, said DPP Tan.

The prosecution highlighted how Ms Khanifah, in a victim impact statement recorded on July 29, said the abuse left her feeling traumatised.

"Even at the court hearings, when I saw her, I felt very scared because I was reminded of what happened. I was scared if I was going to be attacked by her again," she said.

Ms Khanifah also revealed that the disfigurations left her feeling embarrassed about how she looks, adding that she believes people are disgusted with the way she now looks.

The abuse was discovered when Ms Khanifah returned to Indonesia in December 2012. Her husband saw her injuries and notified the maid agency.

During the trial, Zariah disputed the allegations of abuse, arguing that she had suffered two strokes and was paralysed on her left side.

But the prosecution said Zariah did not suffer from any mental illness at the time of the offences. DPP Tan also said medical evidence showed that Zariah still has normal functioning and strength in the right side of her body.

In his sentencing remarks, District Judge Tan said the couple isolated Ms Khanifah from her friends and family in an attempt to force the domestic worker into submission.

He added that "sadly, both persons have demonstrated no remorse” for their actions, despite having had past offences of maid abuse.

"To prevent a serious escalation of violence, the sentence must reflect the gravity of the offences," said the judge.

Related Stories
Cabby and GF assaulted maid in Yishun flat over trivial matters, even choking and biting her
Couple forced maid to do chores only in bra and short pants, caned her, made her eat own vomit
Condo resident abused maid and broke her nose, monitored her through CCTV cameras
More About:
abuse
maid abuse
violence
jailed
courtroom
court