Woman injured after van gets rear-ended by Merc on AMK South Flyover, husband appealing for witnesses 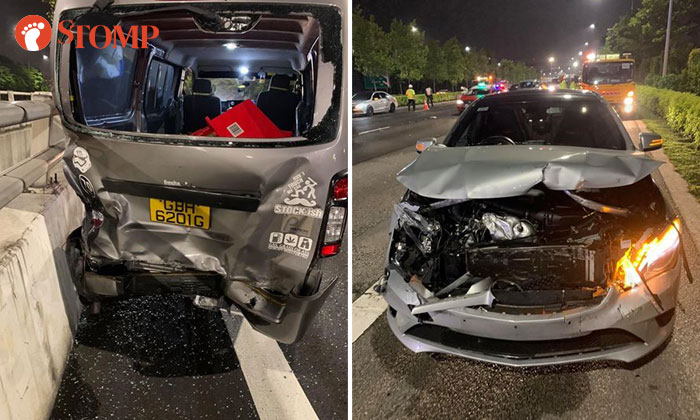 A 24-year-old woman was taken to hospital with injuries after the van she was in was rear-ended by a Mercedes-Benz on the Ang Mo Kio South Flyover on Tuesday (Feb 25).

Stomper Shehzad, the woman's husband who was driving the van, is appealing for witnesses.

He told Stomp his the accident involving his van GBH6201G and the Mercedes-Benz SMR5211B happened at about 12am.

"The Merc hit me from behind when I was on the third lane driving at between 70 to 75kmh," he said.

"The impact made me swerve to the first lane and hit the road divider.

"There were a couple of witnesses on the spot but I couldn't get anyone's number as my wife and I were injured and could not even take the particulars of the car driver."

Both Shehzad and his wife were taken to Tan Tock Seng Hospital.

Shehzad shared his injuries were minor but his wife suffered a fractured toe and abrasions to her lower body, shoulder and elbow.

He has since made a police report regarding the incident.

If you have any information or footage regarding the incident, kindly contact Stomp at stomp@stomp.com.sg or WhatsApp 9384 3761.