Woman talks to Stomp about attack by female clubber who's '2.5 times her size' 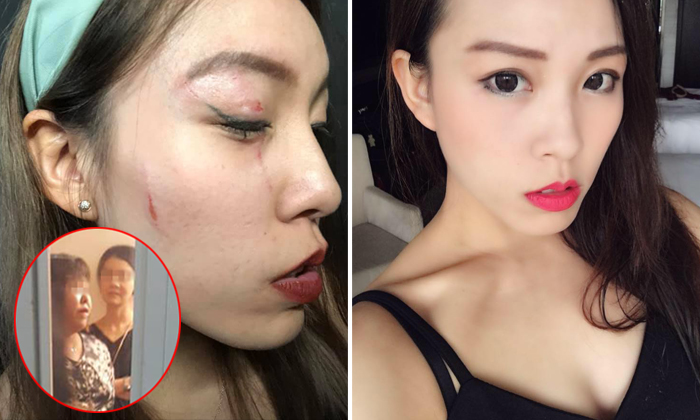 A 27-year-old woman was left with multiple injuries after allegedly being attacked by a female clubber who was described to be more than twice her size.

The incident occurred at a club in Clarke Quay on Aug 22, said Ms Voir Valeisky, an events talent, when contacted by Stomp.

In a Facebook post on Aug 22, Ms Valeisky shared photos of her injuries and described how the incident started when she and her friends went to the dance floor. 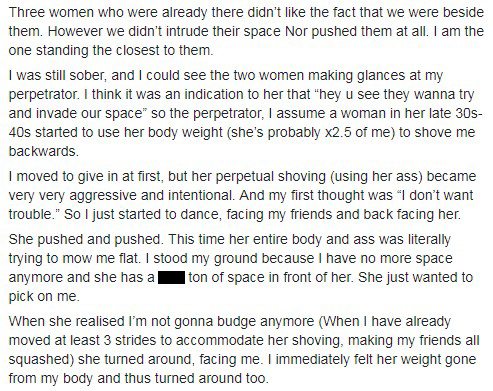 Ms Valeisky, who had visited the club with seven other friends, told Stomp that the woman tried to strike her three times.

She recounted: "She immediately lunged for my head, but I guess she missed and thus left all these wounds on my cheeks instead.

"Right after that attack, she grabbed me forcibly by my arms and shoulders, and pushed me. I lost my balance but I didn't fall.

"The third time, she tried to punch me but her friends pulled her away."

According to Ms Valeisky, the attack was unprovoked and not once did she retaliate.

"I never said a single word," she added.

Ms Valeisky then approached the club bouncer, who walked her out of the premises.

Ms Valeisky said: "My friend managed to locate the woman in the club. She came out and started yelling.

"It was very awkward while we were waiting for the police. The woman was laughing and chatting loudly to her friends while I sat there crying because I was starting to feel the pain from my injuries." 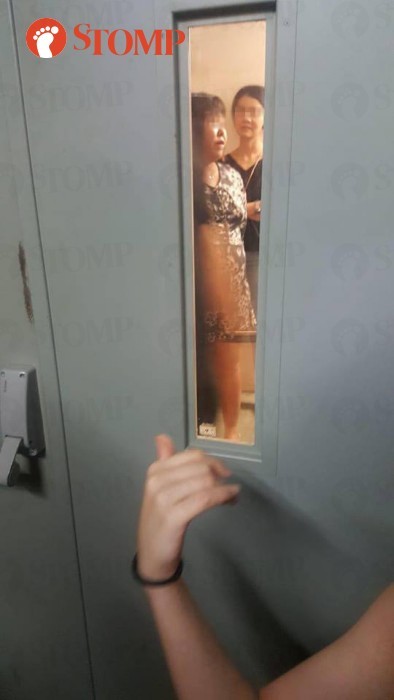 (Photo of the alleged attacker in a floral dress and one of her friends, which Ms Valeisky shared with Stomp)

In response to a Stomp query, the police said they were alerted to a case of voluntary causing hurt involving two women at 3E River Valley Road at 12.50am.

"Both parties were advised on their legal recourse," a police spokesman told Stomp.

Ms Valeisky said the attack left her with a 3cm wound on her cheek and an inflamed wound on her eyelid, in addition to cuts and bruises on her arms.

She added: "I couldn't move my jaw. The whole morning, I couldn't eat or talk."

Ms Valeisky went to Ng Teng Fong General Hospital, where her medical bills amounted to around $140.

A subsequent visit to another doctor cost her about $280 as she had an X-ray done. She was also given a week of medical leave.

Ms Valeisky, whose livelihood depends on her appearance due to the nature of her job, told Stomp: "Even if not working in events, which girl will want to see her face like that?"

During an interview with Shin Min Daily News, she estimated losing around $1,000 in income due to having to cancel one week's worth of work commitments.

She is also considering filing a civil lawsuit.

"I have cried a few times after the incident. I didn't dare to leave the house to face anyone, nor did I dare to look into the mirror," she said.

"Even though I am not rich, I won't let the woman get away scot-free."

In a Facebook post on Aug 24, she responded to netizens who accused her of trying to seek attention by raising two points:

She also urged people, especially girls, to look out for each other when clubbing.