Woman injured after allegedly getting thrown off slide at Admiralty Park 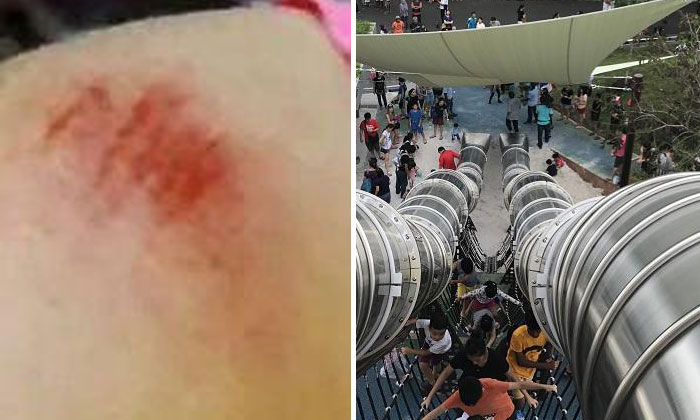 A woman claimed that she suffered injuries after she was allegedly thrown off a 23m-long, 9m-high slide at newly opened Admiralty Park.

The woman, Ms Jiang, 24, told Shin Min Daily News that she and her sister had visited the park last Sunday (Nov 5) at around 6pm.

Ms Jiang said that she suffered injuries to her head, shoulders, arms, thighs, and spine.

She said: "The slide was very steep and the rate of descending was very fast.

"Out of fear, I tried to use both my hands for support, but I still lost control in the end and was thrown off the slide."

Ms Jiang said that her sister also suffered the same plight and had bruises on her leg after playing with the slide.

Other users reportedly had trouble controlling their speed while they descended too, she said.

According to Ms Jiang's observation, many parents, worried that the slide was too steep, would wait at the end of the slide to receive their children.

Ms Jiang added: "I hope that my experience will serve to remind other visitors to be careful even as they are enjoying the facilities.

"I also hope the authorities can implement more safety features to prevent others from getting hurt."

Ms Jiang expressed that she spent $52 on a visit to a tradition Chinese medicine (TCM) practitioner for her injuries.

Reporters visited the scene at around 6pm on the day.

The slides appeared to be quite popular and visitors had to queue up to half an hour for their turn.

During their time there, the reporters also saw a mother and her young daughter falling after they landed from a slide.