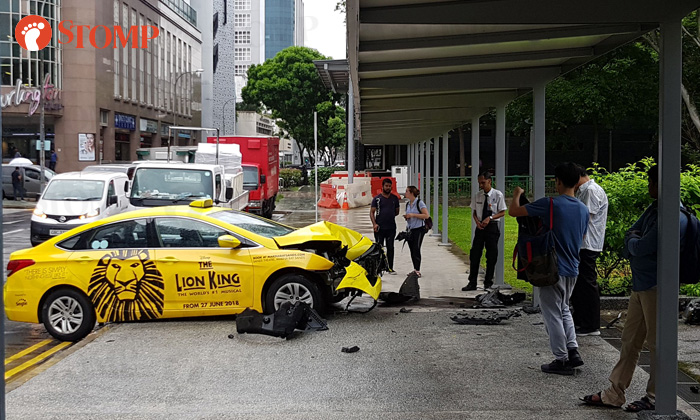 A taxi 'shot out' of Sim Lim Square's carpark, collided into a van and hit a pedestrian on a sheltered walkway along Prinsep Street.

Stompers Richard and Shawn had sent photos of the incident to Stomp.

One of the photos shared by Richard shows the taxi's mangled bonnet, with parts of it littering the walkway.

Richard told Stomp: "The taxi shot out of Sim Lim Square's carpark, hitting a van along the way and injuring one pedestrian who was walking under a covered walkway.

"And two other people escaped death by mere inches."

In response to a Stomp query, the police said that they were alerted to an accident involving a van, a taxi and a pedestrian along 1 Rochor Canal Road at 3.39pm on July 2.

"The pedestrian, a 22-year-old woman, was conscious when conveyed to Raffles Hospital.

Stomp understands that the van was in front of the taxi and was exiting the carpark when the incident happened.

The van had passed through the carpark gantry and was turning right into Prinsep Street when the taxi collided into its rear.

The taxi then mounted the kerb and hit the pedestrian who was on the pavement.

"We strongly condemn the unsafe driving actions of our cabby.

"We are assisting the police in their investigations and at the same time, trying to reach out to the injured to assist them during this difficult time."

Ms Tan also said that it will be stepping up remedial safety driving courses for drivers who are deemed to be accident-prone.