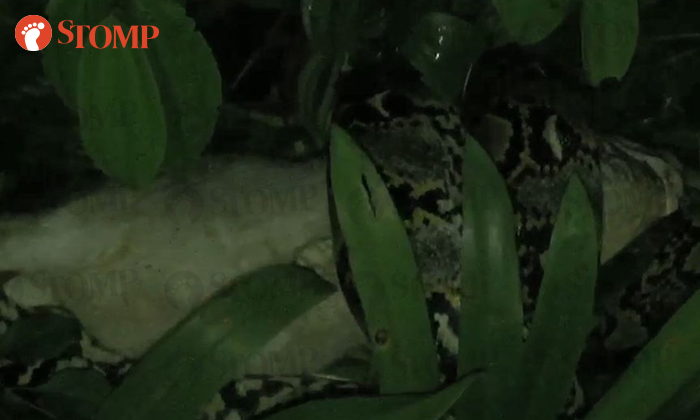 A woman was seen crying after she came across a stray cat that she had been feeding, being strangled by a python.

Stomper Caesar alerted us to the incident which is said to have occurred at around 8.30pm on near Blocks 330 and 331 in Ang Mo Kio Avenue 1 on Jan 23.

In a telephone interview with Stomp, he said, "I was doing my push-ups, when a lady came up to me asking me if she has seen her cat."

Noticing the cat looking in the direction of the bushes, Caesar told Stomp that the woman then stumbled upon the snake curling around her cat at the forest area nearby.

She then cried out, "There's a snake there! It's my cat!"

The cat was established to be a stray that the woman had been feeding from young.

"I went to see for myself and was quite shocked. I don't dare to go near," said the Stomper.

However, he still managed to record a video of the snake curling around the cat.

Passers-by were also heard in the video exclaiming how big the snake was.

One of the passers-by then called for a pest control company.

The pest control company arrived at the scene but said that they were waiting for the snake to finish eating as they do not want to injure the snake.

Given that the area where the snake was spotted is near a fitness corner and a playground, the Stomper said, "I hope that parents will make sure that their kids are careful because they will run around. Hope that they will stay away from the bush area."