Woman in Singapore gets charged $48.50 for Deliveroo order in the UK she didn't make 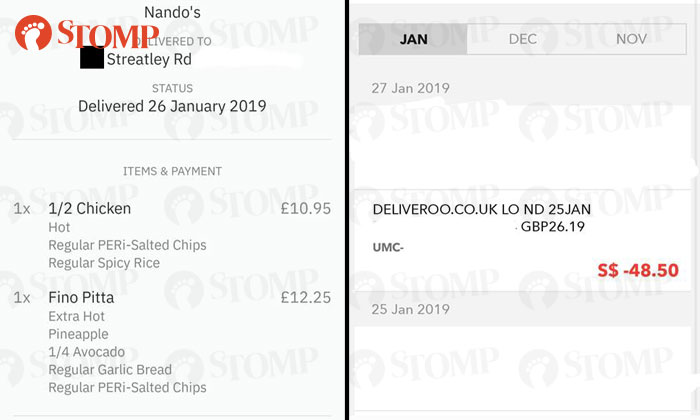 Stomper Anna was shocked when she received an email on Sunday (Jan 27) informing her that she had ordered two meals from Nando's via Deliveroo -- all the way in the United Kingdom.

Initially, she thought that the email was a spam message but decided to double check her order history on her Deliveroo app and found that she had indeed been charged £26.19 ($48.50).

The order was delivered to an address at Streatley Road in London.

"I got a shock because I realised that it was not a spam message," she told Stomp.

"However someone had really used my Deliveroo account to order something in the UK.

"I proceeded to check my bank account and found that $48.50 had been deducted from my debit card."

Initially, Anna thought someone might have stolen her bank card details and ordered from their own account but soon realised that the order was made with her own Deliveroo account.

"I thought that a One Time Password (OTP) is required when a user adds a card or makes any payment online but I did not receive any messages about this," she said.

"I think that many of us link our cards to our Deliveroo account to ease the hassle from keying in the card details for future orders.

"It is so scary that someone could access my account to order food, even in another country.

"I don't even know if I can get my money back."

Anna has since reported the issue to Deliveroo's Singapore and UK office.

In response to a media query, a Deliveroo spokesman explained to Stomp what might have happened:

"The activity reported arises from customers using the same usernames and passwords on multiple online accounts and those details being involved in a data breach on another platform, not on Deliveroo.

"As soon as any customer makes us aware of fraudulent activity we immediately suspend their account to prevent further fraud.

"Deliveroo takes this issue extremely seriously and is constantly working to combat fraud on behalf of our users.

"We have implemented specific security measures targetted at this type of fraud."

Related Stories
Foodpanda offers refund and voucher to customer who received ramen with soup spilled in bag
Woman receives food delivery that spectacularly fails to live up to expectations
Man orders GrabFood -- and is surprised by who delivered his food to the door
More About:
Deliveroo
delivery
food delivery
charges
fraud