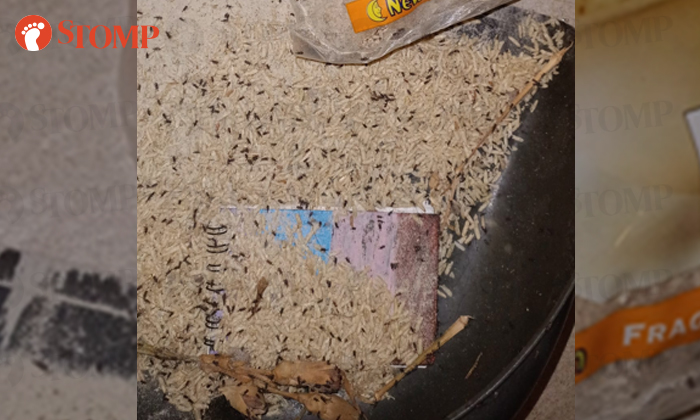 A woman opened a new pack of rice and was horrified that weevils had gotten to it before she did.

Stomper Danielle said she purchased the 2kg pack of brown rice from a supermarket "around two to three months ago", but could not remember where exactly.

She opened it on Tuesday (Jan 11) and was shocked to find it infested with weevils.

Danielle, who shared photos of the insects among her rice, said: "This is my first time buying New Moon's rice. My usual brand has never given me problems.

"I wrote in twice to New Moon about this but there was no response."

The Stomper said she threw everything away, adding: "There were too many weevils to even try salvaging anything. We were rushing to sweep them away before they infested the other packs of rice and flour!

"When I was young and helped my mum in the kitchen, there were the occasional ones we picked out and threw away before washing thoroughly.

"But with so many weevils this time, I didn't know where to start and was worried about the eggs left behind even after washing. I surely wouldn't dare to eat the rice!

"This was a very cringey experience. Now I'm worried about what's being sold at hawker centers, coffee shops and restaurants. We have no idea the condition of the rice that they serve us.

"After all, New Moon is not an unknown brand. How could this have happened?"

According to the Singapore Food Agency (SFA), rice weevils can be found in crops in the field before they are harvested and brought to a food processing facility.

These weevils may only be visible in food products some time later, and generally enter homes when these products are purchased by consumers.

The presence of weevils can be identified through signs such as round holes in the kernels of rice grains, and increased moisture levels where grains may feel damp.

"Consumers can remove rice weevils by washing the rice. They can continue to consume the rice thereafter," SFA said on its website.

Related Stories
Woman grossed out by bug in her economy rice meal from Breadtalk IHQ's Food Republic
Woman bugged to find insect on her plate just as she was about to finish eating at Thai restaurant
Man prickled to find centipede in economy rice from Pasir Ris stall
More About:
food
insect
insects
disgusting