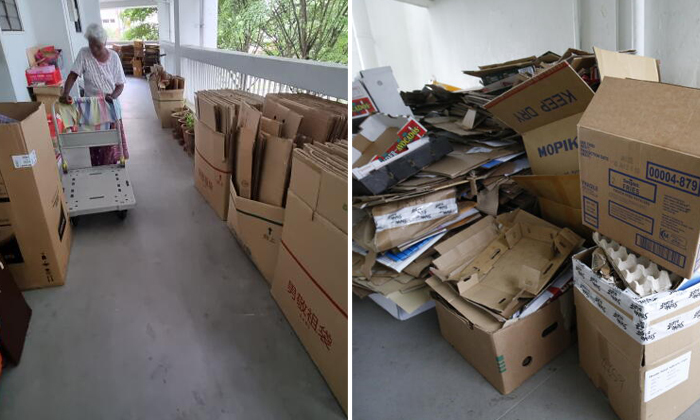 An elderly woman hoarding cardboard boxes in the corridor of a Housing Board block has sparked concerns among residents about a fire hazard and obstruction of the pathway.

Madam Sallemah, who is in her 80s, has been doing this for about 10 years, The New Paper learnt during a visit to her block at 252 Jurong East Street 24 last Monday.

Stacks of hundreds of mostly folded boxes line the common corridor and stairwells on the third storey where the mother of five lives with her son.

She told TNP in Tamil she had collected the boxes from nearby areas to pass the time and earn some pocket money.

"What other job is there for me? I can't earn anything if I just sit at home," she added.

A relative who lives elsewhere told TNP her cardboard collection was not an issue previously because a karung guni man turned up regularly to pick up the boxes and give the elderly woman some money.

"But the man suddenly stopped coming after Chinese New Year this year," she added.

A neighbour who wanted to be known only as Mr Ramli, 49, said: "The cardboard can easily catch fire if someone were to throw a cigarette butt near it. It also looks messy."

Other residents spoke about similar concerns to Chinese-language daily Lianhe Wanbao, which said some cardboard caught fire last year, but the flames were quickly put out by residents.

Responding to a Lianhe Zaobao report, Minister for Sustainability and the Environment Grace Fu said on Facebook last Tuesday that she understands and empathises with the worries of the residents, but she also asked for their tolerance and compassion.

Ms Fu, who is MP for Yuhua SMC, said the Jurong-Clementi Town Council (JCTC) has been helping Madam Sallemah and her family for more than 10 years through government assistance programmes, financial aids and food rations.

She added the JCTC will continue to engage Madam Sallemah to work towards a long-term solution to safeguard her welfare and the safety of the community.

"Our current approach is to persuade her to work with our waste collection contractor to collect and store the boxes at the bin centre, instead of the corridor, which will enable her to earn some remuneration at the same time," Ms Fu said.

"While Madam Sallemah's actions have certainly caused some inconvenience to fellow residents, I hope all of us will view this matter with tolerance and compassion, and support our efforts in extending a helping hand to the vulnerable groups in our community."

Madam Sallemah's relative agreed that she did not need to collect the boxes out of financial need as she receives support from family members and community organisations.

"We often tell her to stop collecting the cardboard and putting it in front of other people's homes. But she is stubborn and says she will be bored sitting at home."

The family is happy with Ms Fu's suggestion and will encourage Madam Sallemah to work with the waste collection contractor, the relative added.

"Anglican Cluster Operator (Jurong East), a social service agency, has been providing social support and checking in with her regularly since September 2016. The elderly woman also receives meals daily from Touch Community Services," the spokesman added.

A spokesman for JCTC said it has cleared cardboard left in the corridor on many occasions over the years and reminded Madam Sallemah to keep the corridor free of obstruction.

Dr Chow added: "It appears she wants to have a degree of control over what she does, without being a burden. With all the financial assistance she gets, she may feel she is imposing on others. For some, work is a significant part of their identity that gives them meaning. The elderly may also fear they may develop illnesses like dementia without work."

To help Madam Sallemah, Dr Chow suggests channelling her motivation towards a less hazardous and taxing form of work.

Related Stories
Elderly hoarder moves clutter between her unit and common corridor at Telok Blangah
Why common passageways in Tampines have been 'treated like storeroom for years'
Overflowing with junk: Residents in Commonwealth worried hoarder's unit is a fire hazard
More About:
messy
neighbour
hoarder
hoarding
elderly