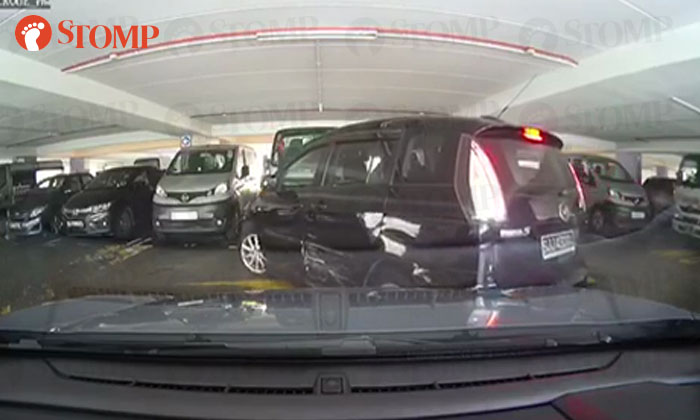 A female driver was caught on video colliding with a car and then driving off without leaving any means of contact.

A Stomper has reached out to Stomp in hopes of urging the woman who damaged his car in the hit-and-run to report the incident.

The incident took place in the carpark at Sunshine Place in Choa Chu Kang on Monday (Sep 24) at about 1pm.

In a video from his car camera, a woman in a black MPV is seen maneuvering her vehicle back and forth a parking lot.

It is unclear whether the woman was trying to park her car or move off from the lot.

Her car then collided with the Stomper's car at least two times before she left.

Sounds of the impact can also be heard in the video, and the woman's car appeared to be scratched up as well.

The Stomper said: "My right bumper and fender is dented and broken, I don't know how much the repairs will cost yet because I'm still waiting for the woman to report it.

"She has to report within 14 days or else I'll have to pay for it myself first and it's very inconvenient.

"It's also inconvenient to drive my car in such a state because it is quite unsightly.

"She lost her sense of directions, lost her conscience as well. I get it that accidents happen but she didn't even leave a note or a contact number.

"I really hope she can report it because it is very irresponsible of her."

He added that a police report has been made.

In response to Stomp's queries, the police confirmed a report was lodged and investigations are ongoing.

Related Stories
Motorcyclist injured after getting knocked off bike by car in hit-and-run accident on PIE
Videos show man examining damage on car after lorry hits it -- before fleeing
Woman knocked down by e-scooter rider at Fajar Road, family appealing for witnesses
More About:
accident
hit-and-run
appeal