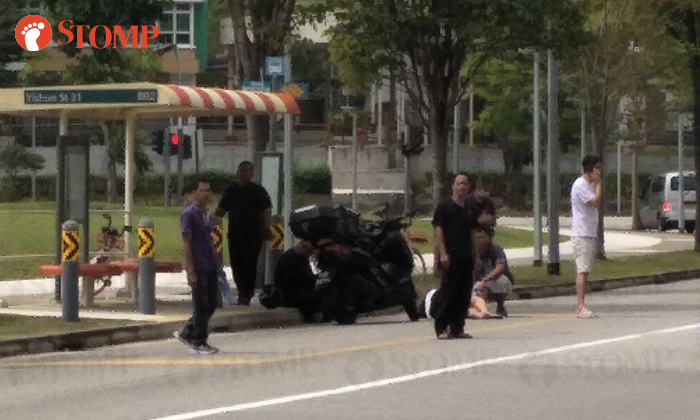 A 42-year-old woman was taken to hospital after getting hit by a motorcycle along Yishun Street 31 on Saturday afternoon (Feb 8).

Responding to Stomp queries, the police said they were alerted to the accident, which occurred in the direction of Yishun Ring Road, at 12.03pm.

The female pedestrian was conscious when taken to Khoo Teck Puat Hospital.

Stomper Adrian, a resident in the vicinity, was waiting for a bus at the bus stop at around noon when he witnessed the accident.

He recounted: "The woman was crossing the road from my side to reach the bus stop opposite.

"She was in the middle of the road, along the white lines, when an oncoming motorcycle started honking from 100m to 200m away.

"However, the woman continued walking. As I was too far away, I'm not sure if she was wearing an earpiece or something that prevented her from hearing the honk.

"She also did not look left or right and just kept going straight.

"The motorcycle, which was going at a normal speed, did not swerve to avoid her either."

"The woman flew up and landed a few metres away from the motorcycle. She was not moving," Adrian told Stomp.

"People from a nearby coffee shop rushed over to help her.

"My bus then arrived and I left the scene, but I managed to see an ambulance arriving in less than five minutes."