Woman hit by falling door at Alexandra Central Mall has injuries to head, liver and pelvis 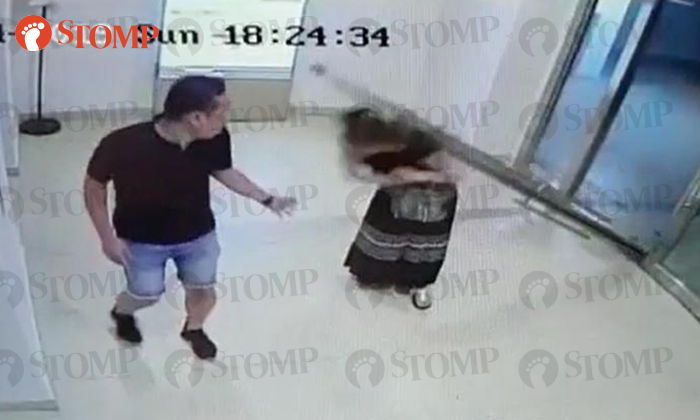 The mall's management also clarified that the video leak is a breach of security protocol.

A woman who was hit by a falling door at Alexandra Central Mall on Sunday evening (Feb 24) suffered multiple injuries to her head, liver, pelvis and legs.

The incident occurred at a carpark lift lobby on the fourth floor at around 6.24pm, and was first reported by Stomp.

The woman was taken to National University Hospital following the incident and is currently in a high-dependency ward.

Shin Min Daily News got in touch with the woman's husband, Mr Cai, who revealed that the family of eight had travelled separately in three cars to have dinner at the shopping mall.

"I entered the lift lobby first, with my wife following behind. After she opened the left door, the adjacent door suddenly dislodged and fell on her," said the 48-year-old, who is self-employed.

"I tried moving the glass door, but it was too heavy and I couldn't lift it at all.

"Seconds later, my brother-in-law came in and we lifted the glass door together.

"I immediately called the ambulance."

According to Mr Cai, his wife had been moaning in pain and in a state of shock.

"She kept asking me what happened and passed out soon after," recounted Mr Cai.

When Shin Min reporters visited NUH, the woman was weak and had difficulties speaking. Parts of her body, including her head, were bandaged.

Her older sister, 53-year-old Mdm Xie, said that the woman suffered injuries and fractures to her head, legs and pelvis. Her liver had also bled from the door's impact.

Mdm Xie added: "The doctor said she required surgery as there is a laceration on her pelvis. Any delay in operating might result in her limping in future.

"Her liver's condition is also being monitored. She may need further surgery if things do not improve."

On Thursday (Feb 28), the spokesman for Alexandra Central Mall's management told Stomp that it would take "appropriate action" against the party who leaked footage of the incident online.

However, this has drawn criticism from netizens, who feel that the management should be focused on the well-being of the woman and other shoppers, and looking into preventive measures instead.

Stomper Bryan, for instance, said: "Why do they want to look for the video discloser instead of apologising for the accident?"

The spokesman did not respond to further queries from Stomp by press time.