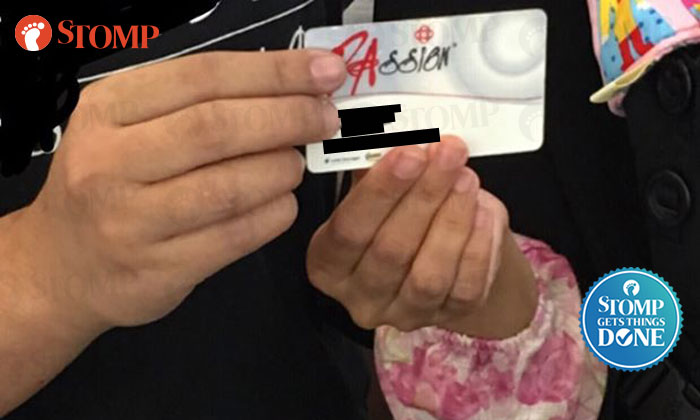 Tazrinah is thankful to have found her PAssion card after dropping it while exiting Khatib MRT Station on Aug 29.

It was found by kind-hearted Stomper Pril.

"I was carrying my infant who was cranky at the time and pushing a stroller that was full of items.

"After tapping out of the MRT Station, I quickly tried to calm my little one down only to realise later when I wanted to board a feeder bus that I had dropped my card.

"I tried to walk the same route but could not find my card.

Thankfully, kind-hearted Stomper Pril found the card and informed Stomp that he wished to return it to its owner.

An article was posted on Stomp on Aug 31 and within one day, Taz reached out to Stomp to find out how she could retrieve her lost card.

"At the time, I could only hope that there will be one kind soul who will be able to return the card as I had just topped it up with a substantial amount.

"I believe that people are kind-hearted and honest."

And she is right.

The two of them arranged to meet each other on Sep 3 and Taz was happy to meet Pril and thanked him for his kind deed.

"Social media is indeed a good network. When I saw the Stomp post the other day I was blessed that I am able to get my card back," she said.

"I believe there are many people out there who have such a good character like the Stomper who found my card."

Related Stories
Man returns wallet he picked up at Esplanade Exchange, apologises for delay as he was busy with baby and night shift
Singaporean woman gets in touch with Indonesian who found her passport in Batam thanks to Stomp
Guy who lost wallet at Woodlands thanks Stomp for helping him find it: 'I'm so touched'
More About:
Stomp gets things done
found
lost
lost PAssion Card