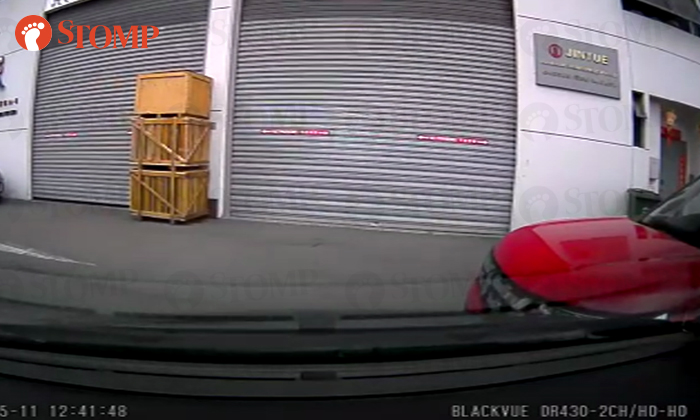 Stomper Kervin was at The Splendour's carpark on May 11 at 12.41pm when a female driver hit his car after she went against traffic.

In a video Kervin shared with Stomp, a red car is seen suddenly emerging from the right just as Kervin was inching out from his parking lot.

The force of the impact can be seen as both cars knock into each other.

"This is a one-direction carpark.

"I parked beside a large truck on my right which blocked my view. After ensuring the left was clear, I drove out slowly since I could not see what was coming from the right.

"A red car then dashed from the right, against traffic, and knocked into me.

"She apologised and explained she was rushing to a meeting. She wanted to pay for the repair and told me to go to her workshop in the evening.

"But when she was told that the repair cost was $4,000, she changed her mind and asked me to claim from her insurance.

"After submitting the claim, I was told I was 50 per cent at fault. The insurance company never bothered to study the case in detail and just take the norm from the guide they have.

"How could this be 50-50 when the female driver went against the direction of traffic?"