Woman gets text from hitch driver asking to hook up, saying he gets aroused by her pics 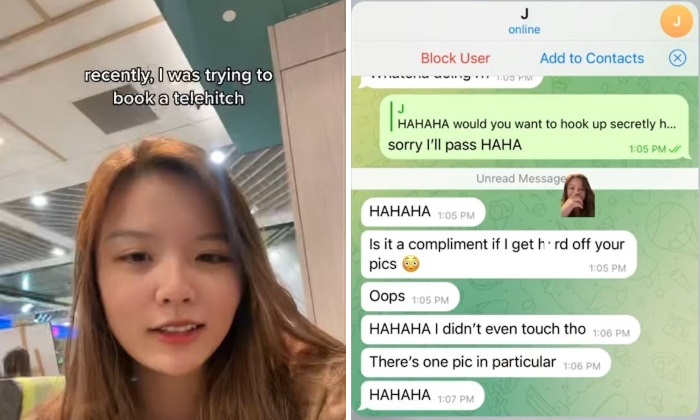 She was looking to hitch a ride, but got an unwelcome invite for a hook-up instead.

TikTok user Nicolett.ee posted a video last Saturday (May 14) detailing how a stranger responded to her ride request with lewd comments.

She said she was looking for a ride on messaging app Telegram when she received a message from a user who offered her a free ride – in exchange for a hook-up.

Screenshots from the video revealed that when she replied with “sorry I’ll pass”, the man, referred to as “J”, then remarked: "Is it a compliment if I get hard off your pics [sic]".

Nicolett.ee's video has since garnered over 100,000 views and more than 150 comments from users who shared her disgust at 'J''s messages.

In the comments, Nicoletat.ee, also had to defend herself against those who tried placing the blame on her, saying she should have booked a ride from a ride-hailing app instead.

"Regardless, even if someone uses Telehitch, it's not like they're asking to get these kind of messages right?" she wrote.

Responding to a commenter who asked why she laughed off the stranger's remark, as it might have served to encourage him, Nicolett.ee said it was because she was "taken aback" by the conversation.

In a subsequent TikTok video, Nicolett.ee said 'J' continued to message her even after she ignored his messages.

After she blocked him, another account, 'L', began messaging her as well.

"They're probably the same person, that's all I know, so stay safe," Nicolett.ee remarked.

Related Stories
Man who gave NTU student a ride allegedly took her to secluded carpark and molested her
GrabHitch driver says 'I drive car not aeroplane' after being asked to arrive on time
GrabHitch driver gets told off by 2 passengers in same morning, ends up earning nothing
More About:
telegram
TikTok
lewd