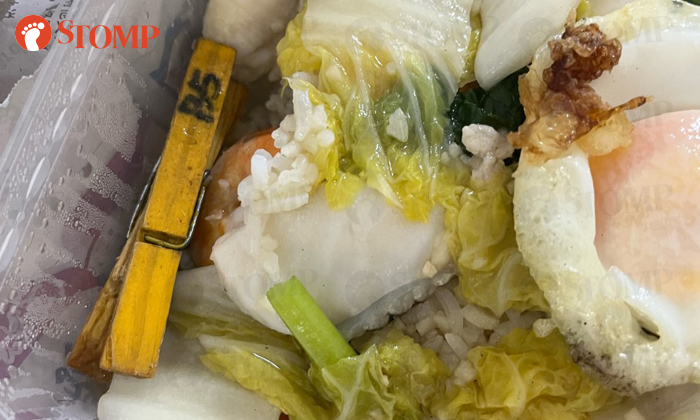 Having been a regular patron of a zi char stall in Bukit Panjang stall for years, a diner did not peg them as the kind of place that would serve food with foreign matter in it.

Stomper Christina said she ordered three dishes from Kimly Seafood at Block 163A Gangsa Road on Tuesday (Aug 9), at 7.06pm.

Upon reaching home with her food, she found a wooden peg in one of the dishes.

"I brought the container down to the stall and the staff said they would give us a new set, but nobody admitted who did this. I feel really pissed off about it.

"I noticed that there is always a lady covering the containers before putting them on the outside table for payment. The lady probably did not check my food before covering it."

The Stomper said this is not the first time she has had issues with the stall.

She added: "There was once I ordered an additional egg for $0.80, but they didn't add it. When I went down and told them, they said they would refund me another egg next time. So I considered the case closed.

"But a few months later when I ordered again, they didn't add the egg.

"Now this time, they did not give the egg but gave me a food clip."

Christina provided feedback to Kimly on the same day, but has not heard back to date. She also informed the Singapore Food Agency (SFA) about the matter.

In response to a Stomp query, SFA said it has received feedback and is investigating the matter.

The agency added: "Food safety is a joint responsibility. While SFA puts in place and enforces the regulatory measures, food operators must play their part by adhering to good food hygiene and preparation practices.

"Members of the public who come across any potentially errant food operator should report to SFA via the online feedback form.