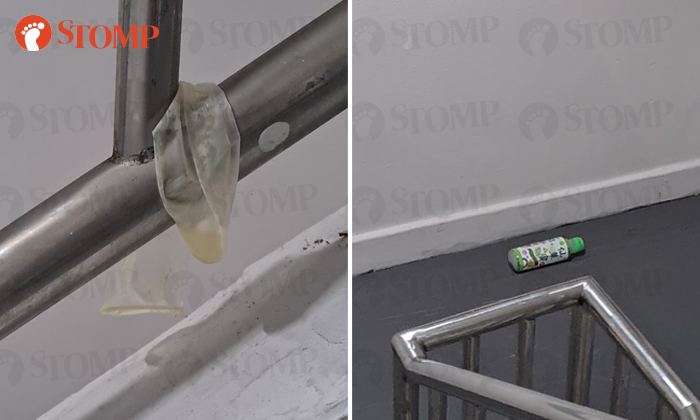 A resident was left disgusted after coming across litter left behind at a Housing Board (HDB) staircase landing in Bukit Batok on Tuesday night (June 1).

Stomper JTan was appalled by the sight of a used condom, along with other rubbish, on the second-floor staircase landing of Block 524 Bukit Batok Street 52.

She shared photos and a video with Stomp.

JTan said: "I was waiting for my husband at our block's staircase when I noticed rubbish in the area. This includes a can of soda, a bottle of green tea, and a used condom hanging on the staircase's railing.

"Although there is always rubbish (i.e. empty packets of chips, soda cans, bottles of juice and even mosquito traps) in the said area, what I saw was very disgusting and inappropriate.

"Hearing and watching news about perverts online, my housemates and I are worried that there might be someone performing sexual acts on the staircase landing, especially when residents are fast asleep.

"The only CCTV camera there is the one just near the second-floor staircase where the used condom was hanging, and none on the higher levels.

"Being a concerned citizen, I lodged a police report online."

Stomp understands that the matter has been referred to the town council and has contacted them for more info.