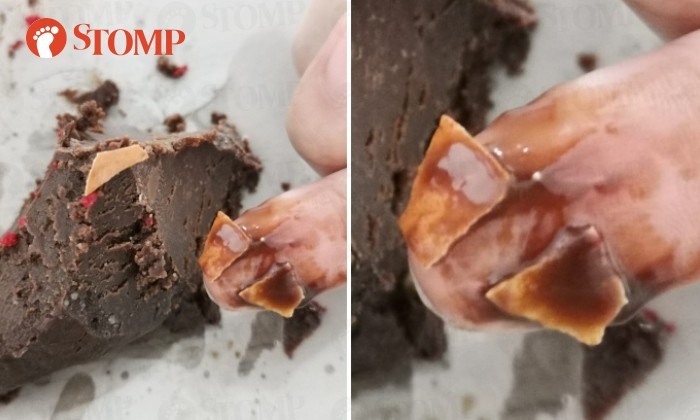 When Stomper J saw that a man had received an Awfully Chocolate cake that looked nothing like what was advertised, she too wanted to share her less than satisfactory experience when she found what appeared to be egg shells in her cake.

J told Stomp that she pre-ordered a baked chocolate melt cake from Awfully Chocolate on December 15 and arranged to have it delivered to her house on Christmas Day.

However, midway through desert time, she was shocked to find what appeared to be large pieces of egg shells inside the cake.

She was even more horrified that she had already fed some of it to her 2-year-old niece. 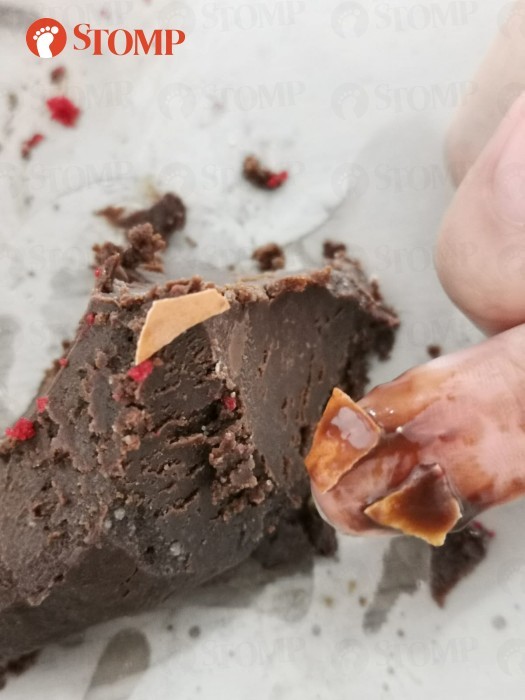 "I decided to share about what happened after seeing that another Awfully Chocolate customer had a negative experience on Christmas Day too," J said.

"My chocolate cake had egg shells in them and I even fed it to my 2-year-old niece. I only saw the egg shells after I fed her.

"The shells were pretty big in size and could have hurt her."

The Stomper shared that she informed Awfully Chocolate about this by messaging them on Instagram.

"I saw that they read my messages but chose to ignore me. But when I posted about my experience on my Instagram Stories, they quickly replied me and said that they would like to give me a refund," she said.

"So I gave them my details so they could do the refund. However, after providing my details, they ignored me once again."

J added that Awfully Chocolate "coincidentally replied" her after Stomp contacted them for more information.

When asked how she felt about her experience, she said: "It was awful, the food had no hygiene standard and the service had no standard too.

"I wouldn't patronise them again and neither will I encourage anyone to patronise them. I always thought Awfully Chocolate was an established brand but I guess I was proven wrong."

Stomp contacted Awfully Chocolate on Jan 11 and Jan 15 but did not get a response by press time.