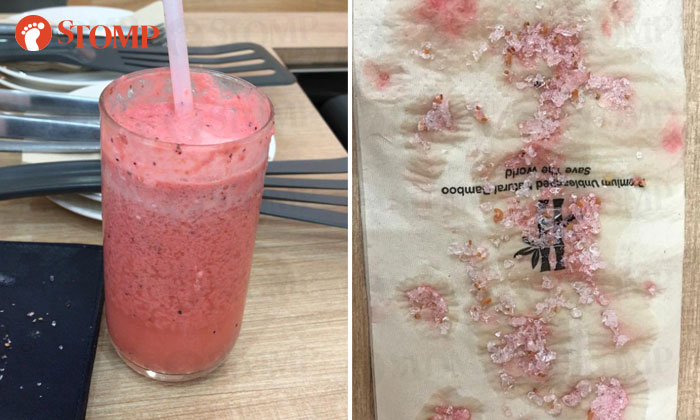 The Singapore Food Agency (SFA) told Stomp it is investigating an incident where a diner found 'glass bits' in a smoothie she had ordered from Slappy Cakes at Plaza Singapura on Sunday (Nov 17).

Stomper Catherine told Stomp about her horrific experience and shared photos and videos she had taken at the eatery.

"I was having a meal with my family at Slappy Cakes when I ordered a smoothie at about 4.23pm," she said.

"After sipping the smoothie, I felt some hard bits in my mouth.

"I quickly spit them out and was horrified to see what resembled glass bits.

"I found more of them as I manually emptied the tumbler."

Catherine added that she had swallowed some of the pieces as well.

She had ordered the drink for her children who are aged five, seven and eight.

"One of my children had a sip but thankfully I drank it before the others otherwise I wouldn't know what would happen to them," she said.

After finding the 'glass pieces', Catherine alerted the restaurant's staff to the matter.

"They simply asked me if I wanted to exchange my glass for another smoothie," she said.

"I told them that this could have killed someone and asked to speak to a manager, which took a while.

"They told me that the supplier of the puree used in the smoothie should be responsible for the matter.

"They added that they didn't know there was any glass in it but I feel they are the ones handling the food sp they should be screening it.

"I felt that they had no sympathy or care for my children and me."

Catherine said she offered to pay for the meal but the staff did not accept her money.

"It's not about the money.

"I want to make others aware of this issue because it is life-threatening and can cause death.

"Those glass bits are a choking hazard and cannot be digested."

In response to a Stomp query, a spokesman from SFA said they are investigating the matter.

Slappy Cakes did not respond to Stomp's queries by press time.

Related Stories
Man finds 'extra topping' in bubble tea from The Alley at Jewel: A plastic cap
Supplier in contact with customer who found 'white particles' in bottle of soya sauce
More About:
food
SFA
glass