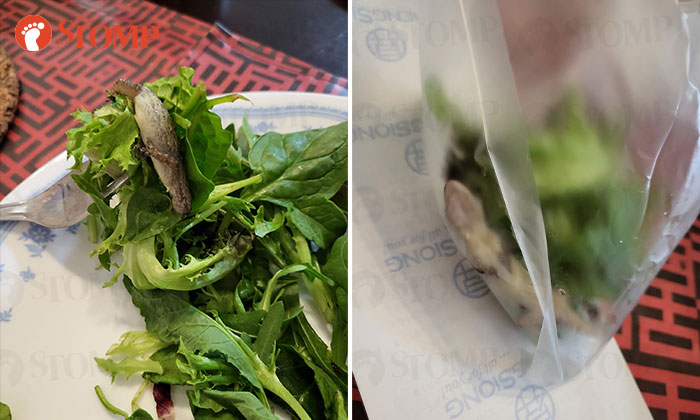 A woman did not expect to find some bonus protein in her ready-to-eat salad but got the shock of her life when she discovered it was a dead lizard.

Stomper Cindy shared with Stomp that she had bought the salad as a "healthier option" from a Sheng Siong supermarket at Block 88 Tanglin Halt Road on Tuesday morning (Sept 13).

"I had it for lunch and didn't find anything strange," she said.

"However at dinner time, a 'great' discovery was found in between my fork!

"I have since tabao the lizard as evidence to Sheng Siong and received a refund as well as submitted feedback to the Singapore Food Agency (SFA).

"Till now, my heart is still beating fast and hands are still trembling as I write this."

In response to a Stomp query, a Sheng Siong spokesman said they are aware of the incident and have apologised and made refund to Cindy.

"The store immediately checked the remaining stocks and alerted the supplier of the incident," the spokesman said.

"Food safety is of utmost importance to us and we will work closely with our supplier to ensure similar incidents are prevented in the future.

SFA told Stomp it has received feedback and is investigating the matter.

An SFA spokesman said: "Food safety is a joint responsibility.

"While SFA puts in place and enforces the regulatory measures, food establishments must play their part by adhering to good food hygiene and preparation practices.

"SFA will not hesitate to take enforcement action against errant food establishments if we have obtained sufficient evidence."