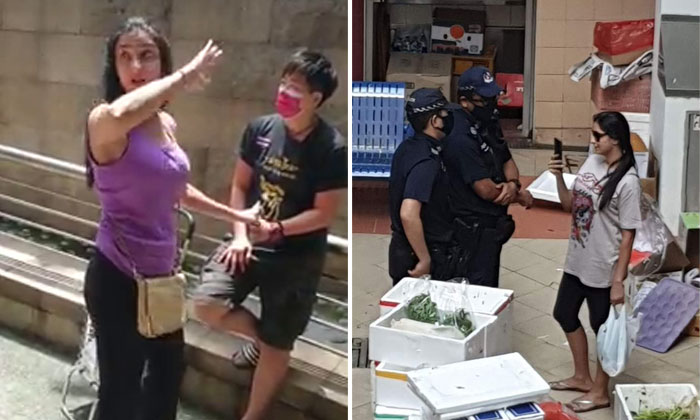 A Singaporean woman who was filmed not wearing a mask at Shunfu Market and engaging passers-by in a heated argument is under investigation for voluntarily causing hurt, causing public nuisance and breaching safe distancing measures.

Videos of the altercations have been circulating online since Sunday afternoon (May 3).

In one clip, the woman says to a couple of other people: "You don't tell people what to do, that's the law."

One replies that she should not have made an indecent gesture, but the woman says: "You should have minded your own business... in the first place, you should not have been shouting at me."

In another clip, at a different location, she can be seen covering her face with her arm and holding on to a phone together with a 47-year-old woman, whom she allegedly assaulted, while arguing with another group of people.

The police said on Sunday that they received a call for assistance around 12.15pm that day at 320 Shunfu Road.

According to preliminary investigations, the woman in the video, a 40-year-old Singaporean who had previously breached safe distancing measures, was not wearing a mask and had allegedly assaulted the 47-year-old woman, who advised her to put one on.

In a statement, a police spokesman said the police take a serious view of such abusive and irresponsible behaviour, especially in the current Covid-19 situation.

"We urge the public to take the circuit breaker measures seriously and comply with the safe distancing measures," he said.