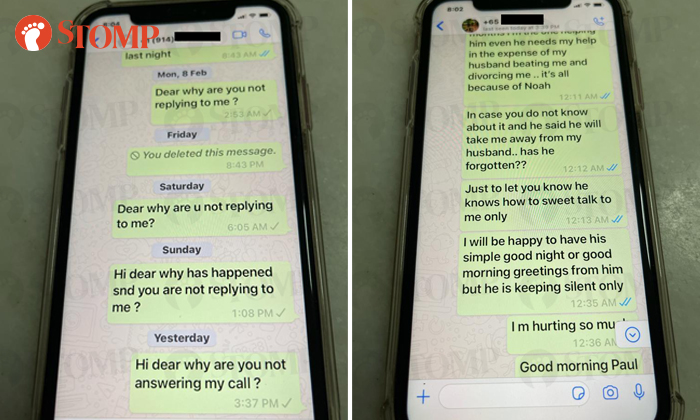 A 59-year-old woman has lost at least $100,000 after falling victim to multiple online scams, leaving her family at their wits' end.

Stomper M said his mother, who works as a clerk in a local company, has gone to the extent of borrowing from banks after exhausting her own savings.

Even more frustrating for M is how the banks would approve the loans despite his family's efforts to intervene.

M's parents are in the midst of a divorce.

By sharing his predicament, the Stomper hopes to create awareness as well as appeal for help.

M told Stomp: "My mother has fallen victim to multiple online love scams. This started way back in August 2020 and she has lost upwards of $100,000 up till now.

"There have probably been about 10 scammers to date. They added her on Facebook and she accepted their friend requests. They then started chatting on WhatsApp.

"The very first time was a love scam where the scammer professed his love for her. He then said he was doing business and had lost a lot of money, He said he needed to borrow money from her and promised that he would pay her back an X-number of folds.

"He sent her some photos of himself and his company. But we used Google reverse image search and managed to find all those pictures online.

"When we showed my mother, she confronted the scammer. However, he said that it was someone who looked like him and she accepted his explanation."

M, who has documented his mother's conversation history with the various scammers, said his mother lost $32,500 to the first con. 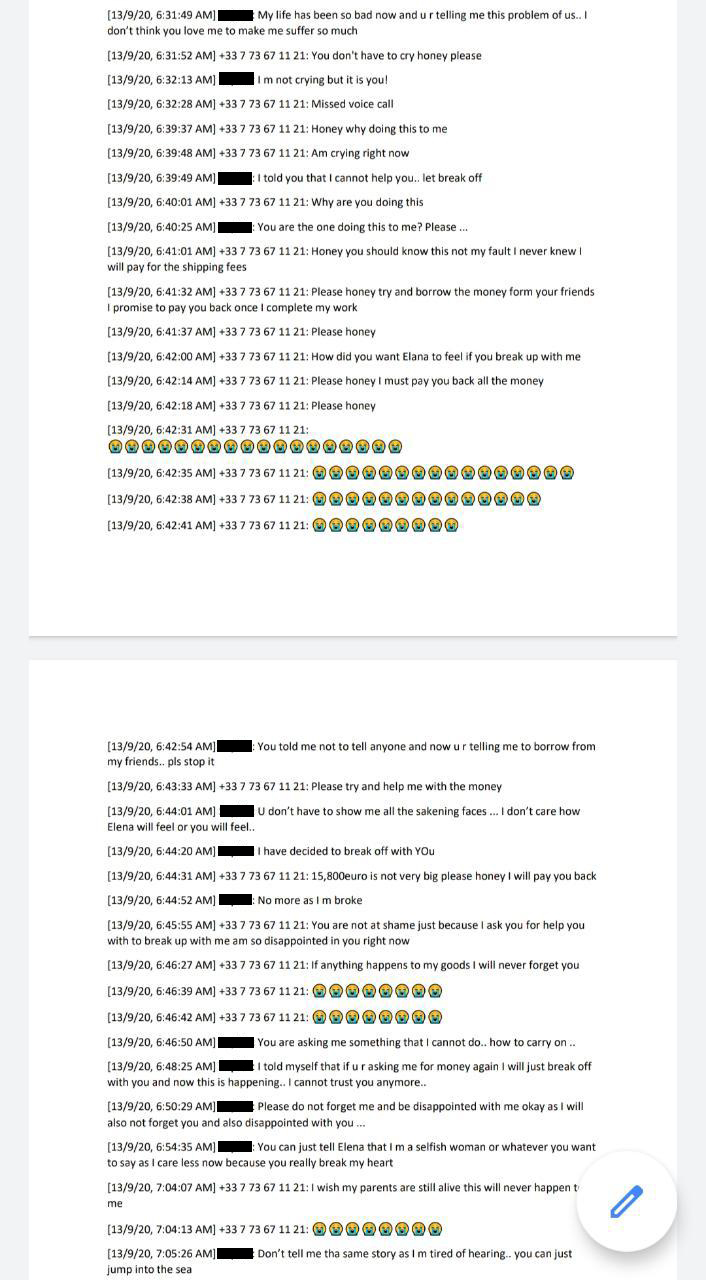 The first scammer, who is using a number with France's country code, can be seen repeatedly pleading with M's mother for money.

M and his brother made a police report on September 15, 2020, but met an impasse.

Unfortunately, the situation has only declined from there.

M said: "My mother is still falling for scams.

"In another love scam in February, she was cheated out of $14,000 after communicating with a foreign number and a local number who pretended to be the middleman/agent." 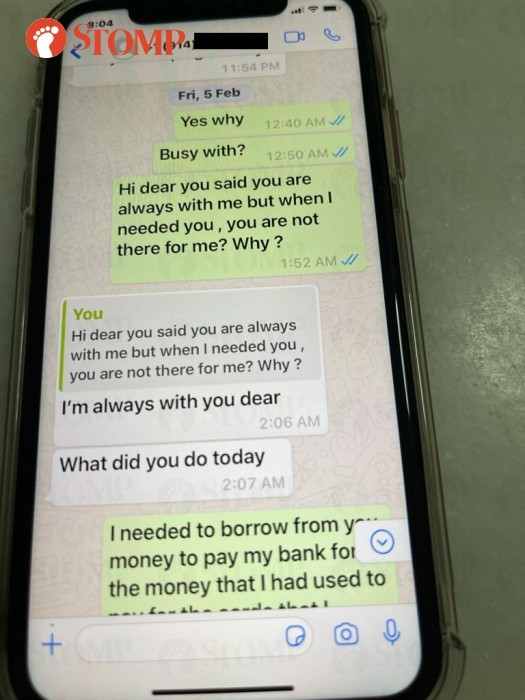 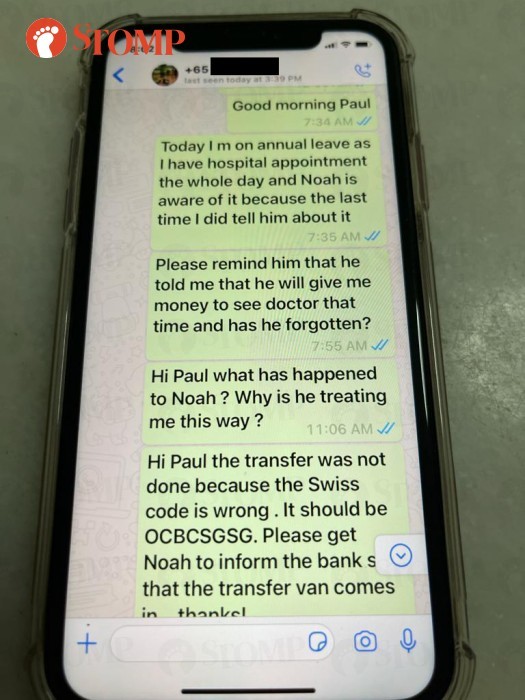 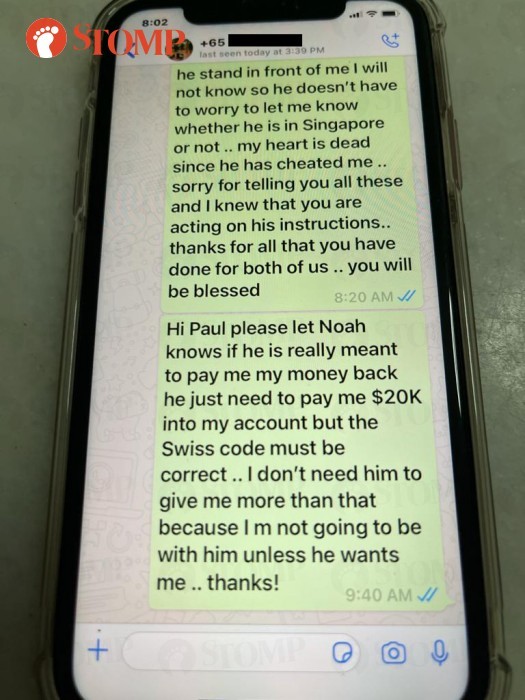 This time, M's mother can be seen communicating with two parties identified as Noah, who is using an American number with a 914 area code, and Paul, who is using a Singapore number."

M said: "In a more recent case, another scammer pretended to be from the FBI and promised to retrieve the lost money, but scammed more money from my mum."

Screenshots from M show his mother communicating with an American number with a 541 area code earlier this year in April.

During the WhatsApp conversation, M's mother can be seen telling a man, who identified himself as Mr Francis, about how she was "being scammed".

She informed him about several scams that she had fallen victim to.

Mr Francis responded: "Your case is quite touching, but can be resolved."

He also said that he does not charge any fees and that "the only thing is you pay for file preparation". 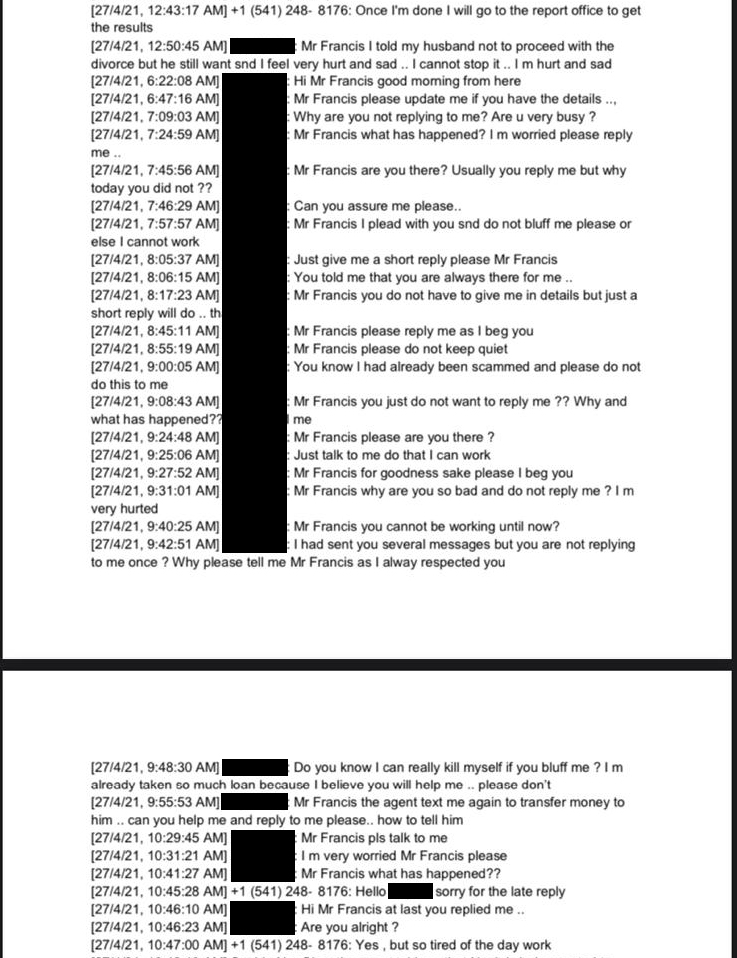 M's mother can be seen getting increasingly desperate as the other party's responses became more and more sporadic.

She subsequently received an email that wanted to her to pay $30,000 within three days for the FBI to conduct "international investigations".

Mr Francis also claimed that M's mother would receive all her scammed money back in three working days after she made payment.

Mr Francis is seen turning hostile when M's mother said that she did not have money.

He told her: "You have yourself to blame, you borrowed a huge amount of money to pay a scammer but for you to get back your money you prove stubborn," and even warned that she would "face the wrath of the FBI".

M confirmed that his mother lost $30,000 to this scammer.

While his brother and his father have also tried to intervene, their efforts have been in vain.

M added: "My father is with us trying to get my mother out of this whole scam, but she’s repeatedly falling for it

"I am exasperated because she keeps borrowing money from banks and the banks will lend it to her even though we have warned the banks that she is a scam victim."

The Stomper shared screenshots of his conversation with an employee from a Malaysian universal bank with branches in Singapore.

M told Stomp: "There were a couple more police reports made by my brother and my mother herself, but all had more or less the same replies.

"And the banks are not helping because they are still lending her money.

"I would like to post to create awareness and seek help because there is very little information on online love scams and very little help available."

Related Stories
Another woman scammed of almost $60k after getting Viber call from 'police from DBS'
Widow left with $99 after life savings of over $54k wiped out in Viber scam, police investigating
Scammers pretending to be from banks have cheated victims of $600k in 5 months
More About:
scam
money
appeal