Woman exposes job scam on Shopee by playing along 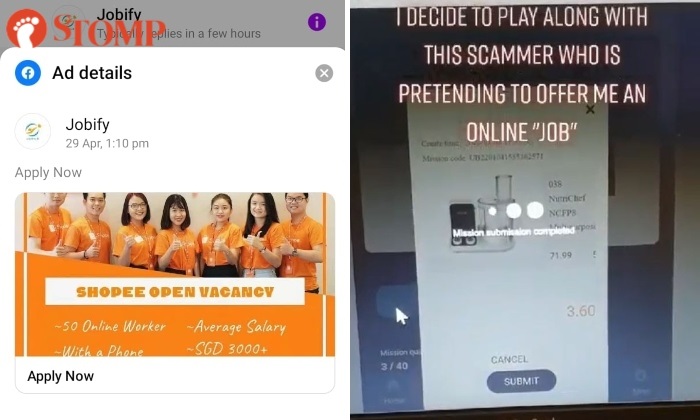 After seeing a "Shopee Open Vacancy" ad online, Stomper Wendy wanted to find out more about the job which offered an average salary of more than $3,000.

In a chat with Jobify, which posted the ad, the Stomper was told that it was a part-time online job where she could work from home.

Jobify said: "main purpose is help shopee sell to increase the sold (sic) of their item and u earn the commision (sic) of the seller

Jobify then talked about "missions" where the task was to pay for a product and send an invoice to Jobify to confirm with the store.

"We will immediately pay you the original amount and % commission for this order within 5-10 minutes!" said Jobify.

Wendy said: "I decide to play along with this scammer who was pretending to offer me an 'online' job."

She made a TikTok video of herself going through the 'missions' on the computer.

The Stomper also contacted Shopee and shared screenshots of the "Shopee Open Vacancy' ad and her conversation with Jobify.

She asked the Shopee customer service representative: "I received an online job, may I know is this a scam?"

The rep said that for Shopee job vacancies, users should visit careers.shopee.sg and advised Wendy to ignore the online job offer to avoid getting scammed.

Police said that more than 50 victims have been swindled of at least $430,000 by job scams this month.