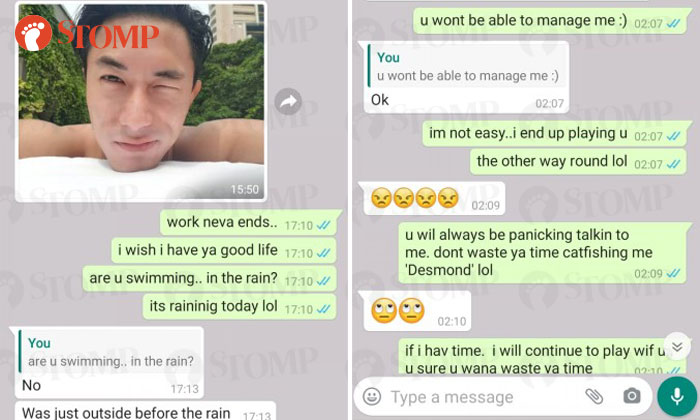 As the world becomes more digital, incidents of people coming across fake profiles online is happening more than before.

A Stomper shared her own experience of exposing a man who claimed to be Singaporean actor Desmond Tan on Instagram.

The Stomper shared that she was targetted by two fake profiles on the social media platform and decided to respond to one of them and play along. She also shared screenshots of her conversation.

In the conversation, the man would send her photos of Tan taken from his own personal Instagram.

"He also video called me with old video clips from Desmond's Instagram but would end the call before the video ends," she said.

"It was so dumb and funny but unfortunately, I couldn't capture that, just the screenshots of our texts."

The man's chats with the Stomper were flirty and when asked why he was using a different profile from his official account, he said it was a personal account so he could "get to know a few of my fans better".

They soon moved the conversation to WhatsApp from Instagram where the Stomper noted his number had a United States country code in front of it (+1).

"I poked him by testing his Chinese language because I wanted to stress him to use Google Translate all the time when he conversed with me and it turns out his Chinese really was totally translated," she said.

"He could not even Google what dialect is and beat around the bush by asking me what my dialect is.

"I had to Google and show him what dialect means in our local context.

"If it was Desmond, who is a Singaporean, he would surely know what it is."

After a while, the Stomper grew tired of carrying on the charade.

"I wish I had more time to play more and expose his catfishing methods but I didn't have time to entertain him for him to ask me for money."

She added that she wanted to share her personal experience to raise awareness on catfishing on social media.

"All sorts to fulfill the needs of different targetted women."

Read the full exchange in the gallery above.