Woman explains why missing hamsters were in corridor, but netizens don't want them in her hands 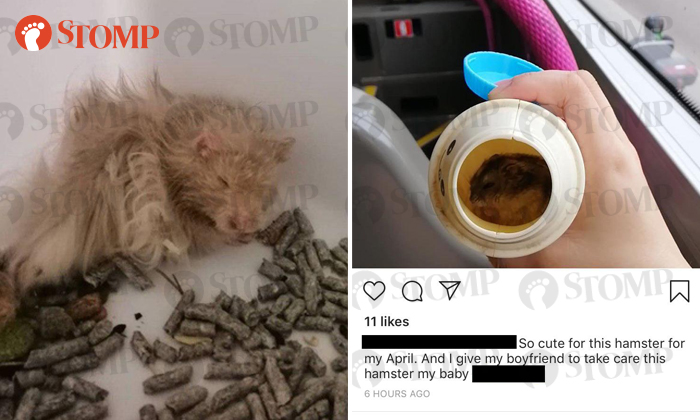 A woman's seven hamsters and their three cages went missing from a corridor in Hougang, but not everyone is rooting for her to be reunited with her pets.

In an earlier article, Stomper Benice shared how her Syrian hamsters were taken away from outside her unit at Block 680 Hougang Avenue 8 on Jan 9.

She made a police report on the same day and investigations are ongoing.

According to Bernice, CCTV footage that she viewed at the police station shows two girls taking her hamsters away at around 4.45am.

In the comments section of the Stomp article and on Facebook, Bernice can also be seen refuting netizens who criticised her for leaving her pets along the corridor.

The 23-year-old told Lianhe Wanbao that she had always kept her hamsters indoors until recently.

She explained: "My mum said that it's more cooling outside, so she placed them along the corridor last Tuesday (Jan 7). She even used a cloth to cover the cages, but did not expect they would disappear after two days."

However, not everyone seems to feel that Bernice is deserving of her hamsters and are questioning her treatment of them.

Several users alerted Stomp to videos that were apparently posted by Bernice on Instagram Stories, showing her handling her Syrian hamsters.

In one video, a hamster can be seen getting startled after being prodded in its sleep. It also had its nose flicked by someone's finger.

Despite Syrian hamsters being highly territorial and having to be housed separately, a second hamster can be seen in the same cage.

A human hand subsequently placed the first hamster on top of the other, before grabbing both rodents together.

Another video shows someone repeatedly tossing bedding onto a hamster and sending it scurrying.

Multiple sources alleged that Bernice "transported" a hamster in a plastic bottle while taking the bus. 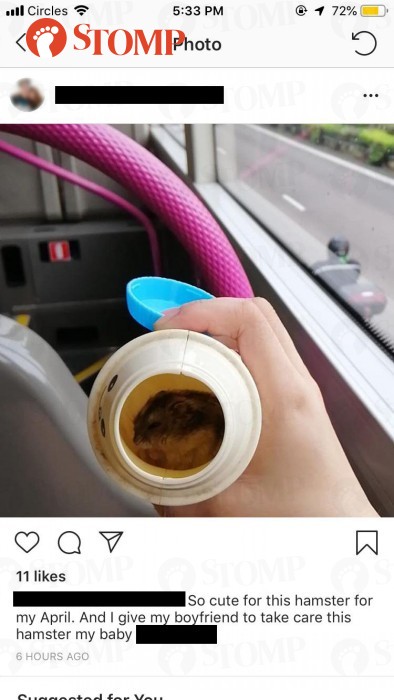 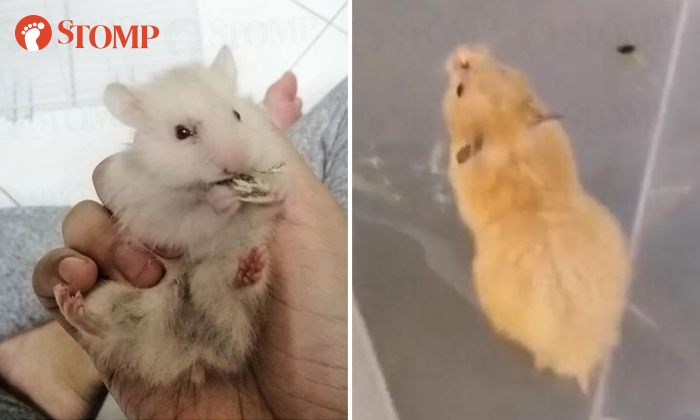 A source also shared pictures of hamsters, supposedly belonging to Bernice, with injuries on them.

The source told Stomp: "One hamster has an obvious bite scab on its left eye, while another has visible bite wounds on its snout.

"Stomper Bernice claims to 'sincerely' love her hamsters and wishes for them to be returned to her, but is that really the case?

"I do not agree with theft, but I sincerely hope the poor hamsters will never be returned to her."

Another source, citing similar concerns, submitted images of a different hamster that apparently belongs to Bernice too. 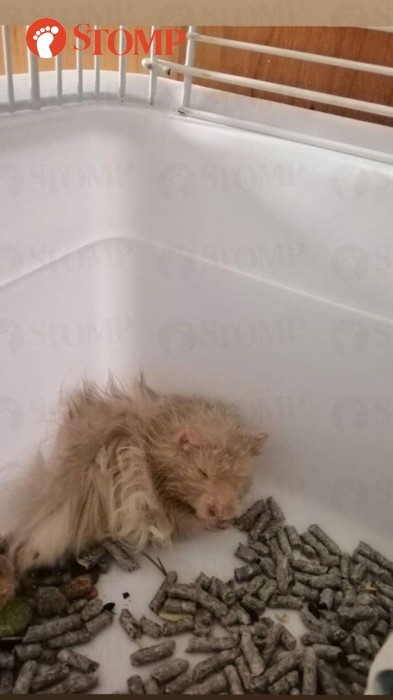 The source said: "This hamster looks so sickly here, need I even add more?

"Plus the bedding in the cage is totally not suitable. It would feel like those reflexology stones for the elderly at the park.

"Please let the community judge whether the hamsters deserve being placed into better hands."

For more information on hamster care, members of the public may refer to the Society for the Prevention of Cruelty to Animals (SPCA) website.

When contacted by Stomp, Bernice denied the allegations.