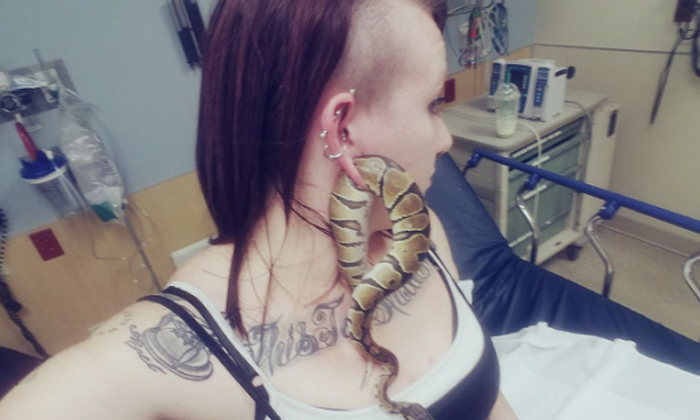 It is no secret that Emergency Room (ER) doctors are full of bizarre tales of patients who have got themselves into the most eyebrow-raising medical situations, like this one, for instance.

Ashley Glawe was playing with her pet snake Bart without her plugs in her stretched lobes when he decided to pop its head through the gaping hole, The Lad Bible reports.

Somehow Bart was so quick and at the right angle that it managed to become wedged in there.

When Ashley realised that there was no way for her to safely extract her pet from her earlobe, she headed to the hospital.

While waiting in the doctor's office, Ashley snapped an incredible image illustrating her predicament, and shared it on Facebook.

The photo was uploaded on Jan 24 and has since garnered over 568 shares.

She wrote in the caption:

"BY FAR one of my CRAZIEST life moments! Went to the Emergency Room because my Ball Python decided to get STUCK in my gauged earlobe!

"It all happened SO fast that before I even knew what was going on it was already too late."

The doctors were able to remove Bart after they made a small incision in Ashley's ear and wiggled it out using some Vaseline.

Related Stories
Yikes! Delta Road resident probably got a huge shock upon coming or leaving home
You haven't seen weird till you check out these bizarre photos from around the world
Turkish workmen have the shock of their lives after digging up live bear from underground
bizarre
strange
snakes
funny
emergency room
hospital
hilarious