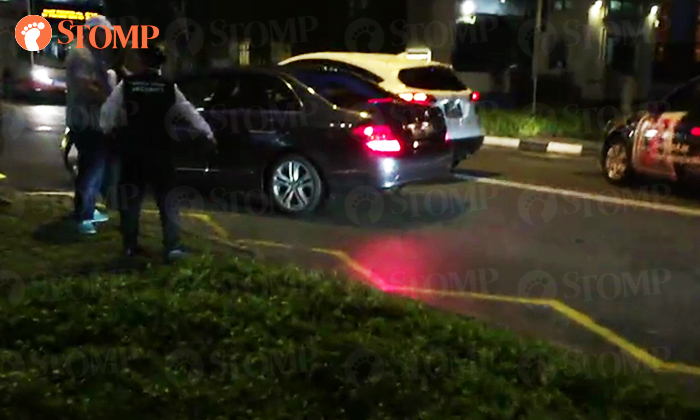 A Mercedes driver left many motorists frustrated after blocking a lane of the one-way road at Wisma Atria, worsening the traffic jam in the area.

Stomper Andy came across this at around 7.30pm yesterday (Jan 26) while waiting for his Grab driver.

Speaking to Stomp over the phone, he said that the woman had refused to move her car for at least 15 minutes.

This was despite security officers and members of the public urging her to move.

He decided to record a video of the incident after the woman still decided not to move.

In the video, the Stomper can be heard saying, "You don't want to move right? It's okay, up to you."

The security officer can be heard in the background saying, "It's unreasonable you know."

Andy then starts to record the licence plate of the Mercedes.

It was only after this that the Mercedes driver started to move.

She told the Stomper, "What's your problem?"

He replied, "Oh yes, continue talking. It's okay because you are blocking the entire road of Wisma Atria."

Andy explained to Stomp the reason why she refused to move her car:

"Apparently there was a carpark nearby but it was full, so they put up a yellow barrier to prevent people from entering.

"However, she wanted the security officer to open up the barrier and let her in so that's why she didn't want to move."

He added, "She is actually quite a young lady, seems to be in her mid-20s. She is educated enough to speak good English but yet lacks basic consideration for other members of the public."

Related Stories
Driver blocks multiple cars at multi-storey carpark for over 1 minute
Man stops car in middle of road at Toa Payoh Lor 1 to confront other driver after getting honked at
Driver of Citroën of SLJ1709 refuses to give way to ambulance -- despite siren and horn blaring
More About:
dispute
inconsiderate driver