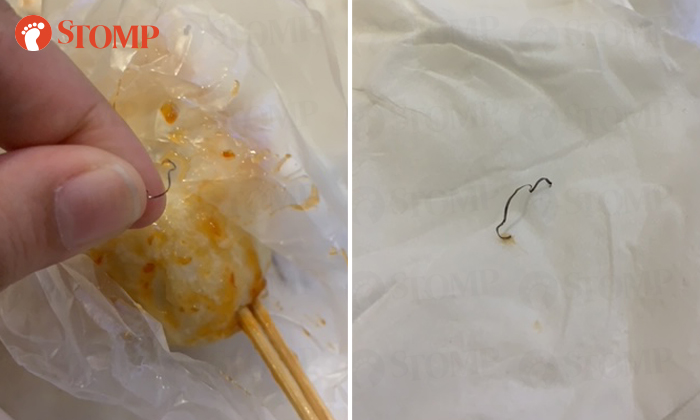 A woman expressed concerns after finding a soft metal-like strand in a fishball that she had purchased from Old Chang Kee on Sunday (Nov 15).

Stomper L said she bought two sets of big fishball and three curry puffs from the Old Chang Kee outlet at Potong Pasir MRT station at around 2pm to 3pm.

She paid $9+ in cash and subsequently shared the food with her family.

L told Stomp: "I added chili sauce to the big fishball and upon biting the first mouthful of it, I noticed what seemed to be metal wire inside the fishball.

"The foreign object was soft and approximately 1cm. It felt like the wire mesh from a cleaning applicator or sponge.

"Disgusted by the sight, I stopped eating and told my young children not to eat the food."

In response to a Stomp query, a spokesman for Old Chang Kee confirmed that the customer had sent an email regarding the matter and said: "We had addressed the issue as best as we can and had promptly and appropriately communicated with the customer.

"The incident was indeed regrettable.

"Upon receiving the feedback, we had promptly contacted our contract manufacturer to inform them of the matter so that they can conduct an investigation immediately.

"Basing on the photos provided, as the ‘metal wire’ was no longer with the customer, they had combed their processing area for similar sample but had not found any wire mesh cleaning apparatus or evident of such metal strand in their production or packing area.

"They had also stressed that all their packed products will have to pass through a metal detector prior to delivery.

"Nevertheless, they have given the commitment that they will continue to investigate further."

Stomp understands that L was offered $15 worth of Old Chang Kee vouchers.

According to L, she is sharing the incident on Stomp to find out if anyone has had similar experiences.

Related Stories
Man finds screw in bottle of fried garlic: 'What if I had swallowed that?'
McDonald's investigating after Stomper finds 'fingernail' in breakfast wrap: 'It was horrific'
Cellulose casing that woman found in sausage is used in production, safe to eat: Sheng Siong
More About:
food
food safety
unhygienic