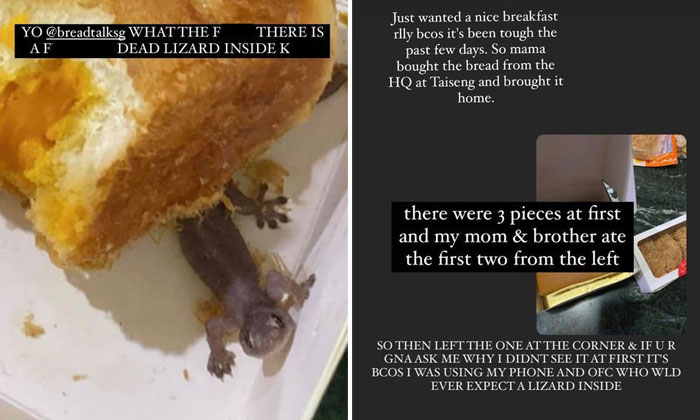 BreadTalk has launched an investigation into an incident where a dead lizard was allegedly found in a box of buns purchased from its IHQ outlet at Tai Seng.

Stomp was alerted to a series of Instagram Stories posted by the customer who found the lizard that have been circulating on social media.

In the posts, the customer expresses extreme disgust at finding the dead lizard in the box of buns.

She said that her mother and brother ate the first two buns without noticing anything amiss.

The dead lizard was only discovered after she had reached for the third and last bun.

She added that she did not notice it at first either as she was using her phone and exclaimed, "who would ever expect a lizard inside".

She also shared her experience with BreadTalk's customer service following the incident. 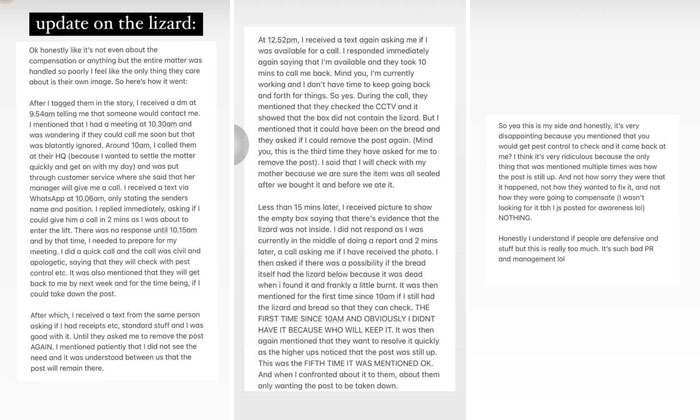 She expressed disappointment and claimed they were more concerned about her removing her posts than resolving the matter with her.

In response to a Stomp query, a spokesman from BreadTalk issued the following statement:

"As of 5 February, we have amicably resolved this matter with the customer. We have concluded and shared our findings with the customer who was regularly updated throughout this process. We would like to take this opportunity to thank her for her patience.

"The incident was brought to our attention on 3 February, 10am by the customer and we immediately launched an investigation. At the same time, we also reached out to the customer to assure her that we are looking into the matter. We recognise that she was understandably upset and also expressed our concern to her.

"Based on information provided by the customer, the purchase was made the day before on 2 February and consumed by the customer the next day. Our CCTV footage from the outlet on the day of the incident shows that our buns were packed into the box at the counter upon order.

"Although we conduct regular pest control checks at all our outlets, we hired a third-party pest control company to inspect the outlet after this incident is brought to our attention and the report shows that there are no signs and markings of lizards.

"We would like to assure the public that food safety and hygiene remains our topmost priority. We value all feedback and will continue to seek ways to improve the customer experience."