Woman dies after accident with minibus in Changi, brother appealing for witnesses 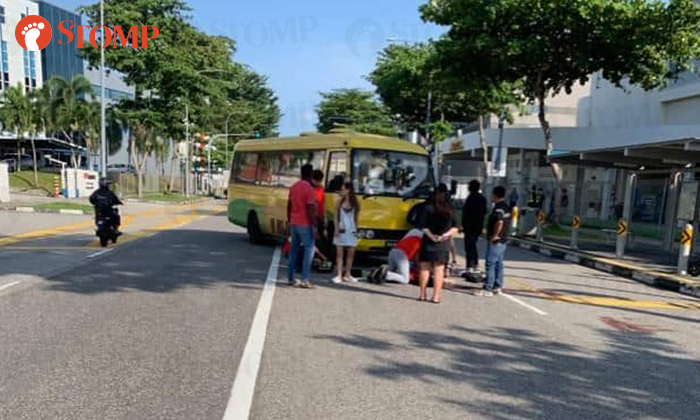 A man is appealing for witnesses after his sister died due to an accident that occurred along Alps Avenue on Dec 26.

When contacted by Stomp, Yen Heng Gee said: "It was a regular day. My sister, Gee Bee Lan, left her place in Ang Mo Kio early for work at Airport Logistics Park.

"She's been working there for more than 10 years as a freight export clerk.

"She has mobility problems and walks quite slowly.

"On that day itself, she was in the middle of the road and waiting for traffic to clear up before proceeding.

"The minibus was probably turning right and ended up colliding into my sister."

At about 10am, Yen received a call from his younger sister who informed him about the tragic accident.

"It was bad. The police called me as I was on the way to the hospital," said Yen.

"By the time I arrived, I saw her body and it looked like she had sustained a bad head injury.

"Bee Lan had already passed on.

"When I saw a photo from my sister's colleague, I could see that the impact was so great that it had left a huge dent and shattered the minibus' windscreen."

Since then, Yen Heng and his family have been trying to find out what happened.

He told Stomp: "None of us or even Bee Lan's colleagues have any information about the minibus' licence plate number, the company it's from, etc.

"We couldn't make out any of those details from photos.

"My 76-year-old father is wheelchair-bound due to a stroke about 10 years ago. He's been living with my sister and now she's gone.

"He didn't take the news well and we try not to bring it up unless absolutely necessary.

"I hope we can get some footage as evidence or else we'll always be kept in the dark about who's really at fault.

"I only heard from my sister's colleague that a doctor had apparently passed by and performed CPR on Bee Lan.

"We would like to find this man and say 'thank you' to him."

Responding to a Stomp query, the police said: "On Dec 26 at 8.52am, the police were alerted to an accident involving a minibus and a pedestrian along Alps Avenue towards Changi Coast Road.

"The 54-year-old female pedestrian was unconscious when conveyed to Changi General Hospital, where she subsequently succumbed to her injuries.

"The 59-year-old driver was subsequently arrested in relation to the case.