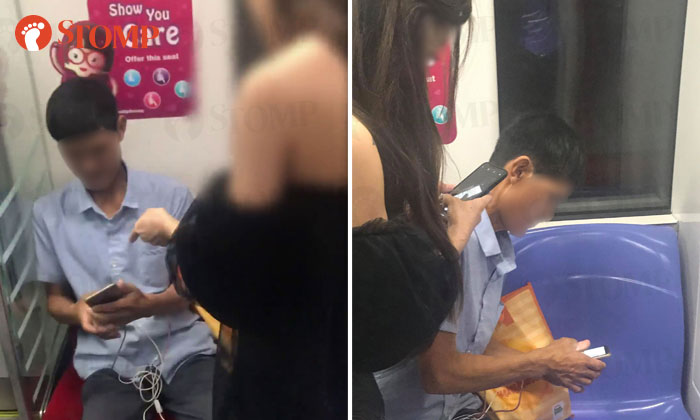 The police are investigating a case of intentional harassment after a woman confronted a man for allegedly taking photos of her on a train along the North East line on Sunday afternoon (June 23).

Stomper Maru witnessed the incident and shared with Stomp a video of the woman berating the man.

"My wife and I entered the train at Kovan MRT Station heading towards Dhoby Ghaut and my wife sat beside the girl," said Maru.

"When we arrived at Woodleigh, I caught a glimpse of the girl looking shocked and angry.

When the train was at Boon Keng, Maru said he heard the girl telling someone on the phone: "I saw this uncle taking photos of me!

"I saw his phone's reflection on the window glass behind him.

Maru said another woman in the cabin helped her to confront the man and tried to take a photo of his phone.

"At first, the uncle denied anything and even tried to leave the train.

"However, he eventually showed his phone to the girl who saw the photos he had taken."

In the video, the woman is heard asking the man if he wants her to report the matter to the police.

The man shakes his head but she tells him she is going to go ahead and make a police report.

She proceeds to take photos of his phone before the clip ends.

"Before we alighted at Dhoby Ghaut MRT Station, I asked the girl if she had called the police already and she said yes," said Maru.

Maru added he did not know the nature of the photos the man allegedly took.

He said the woman was wearing an off-shoulder top and short bottoms.

"I can't say it was too provocative to look at but the man did take photos of her without her permission and with malicious intent."

Responding to a Stomp query, the police said they were alerted to a case of intentional harassment at 11 Orchard Road at about 12.37pm on Sunday.