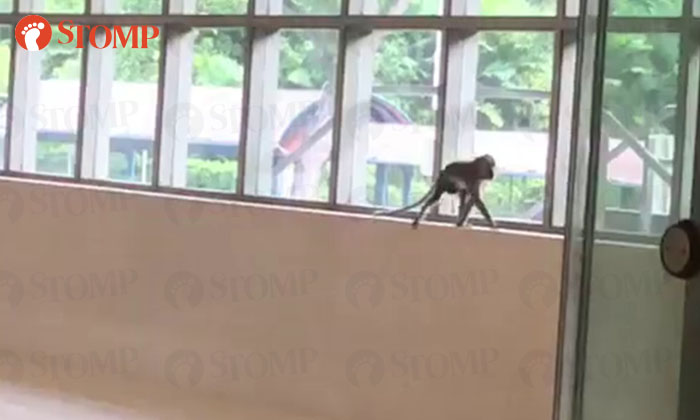 A woman was concerned after she saw a monkey roaming about in Tanah Merah MRT Station at about 6pm on Monday (Dec 23).

A Stomper took a video of the incident and shared it with Stomp.

The Stomper said: "I had already tapped in at the gantry and was waiting for the lift with my two-year-old son so that we could go up to the platform.

"I noticed the monkey when I saw a staff running to open one of the doors in the station to let the monkey out.

"When the door opened, I could see that it led to a road outside the MRT station.

"I didn't approach any of the staff about this situation. I don't think they saw me taking a video of this.

"I've been in Singapore for 10 years and this is the first time I'm seeing a wild animal so openly.

"If they're pets then I understand but this is a wild animal.

"It's quite dangerous and scary.

"My son was in a stroller but there could be kids that aren't, maybe they're just holding their parent's hand and they could go towards the monkey.

"The monkey could snatch things from random people too.

"I don't know if a team was called in to catch the monkey. I'm also not sure if the staff at the MRT are trained to capture the animal.

"The first thing that came to my mind was to share this with Stomp so that people can be aware and handle such situations better."

Related Stories
Police called in over monkey minding its own business at Bukit Batok bus stop
Cyclist greeted by monkeys on his ride home along Nicoll Drive
Monkey at Changi Airport T3: There were concerns of it venturing to runway or near planes, says Acres
More About:
monkey
Tanah Merah
animals