Woman collapses after getting 'hit' by car, flees after hearing driver call police 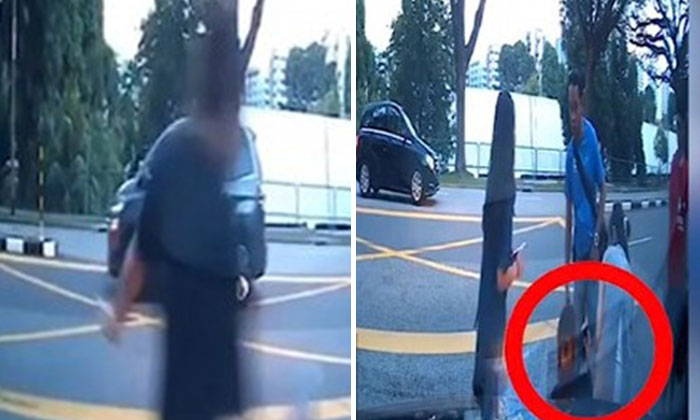 A woman suddenly threw herself on a car before collapsing on the ground, only to flee when she heard that the driver was calling the police.

The incident happened at the entrance of a carpark beside Depot Height Shopping Centre on Sunday (March 18) at around 7pm, and was recorded on the vehicle’s dashboard camera.

Ms Wu said that she was driving out from the carpark during the time of the incident.

She noted that she had passed the gantry and was heading towards a road hump.

As such, she had to drive slowly.

Suddenly, a woman dressed in a black shirt and blue shorts dashed out.

Ms Xu started panicking as she thought that she had hit someone.

She jammed on her brakes and alighted her car to investigate.

Ms Xu found the woman in black seated on the road, her face seemingly contorted with pain.

She quickly approached the ‘victim’ to see if she had been injured.

However, Ms Xu grew increasingly suspicious of the woman, as she was sure that her vehicle had been moving slowly, and she herself was quite a careful driver.

She thus insisted that they wait for the police to arrive before sending her to the hospital.

Ms Xu also told the woman that the whole incident was recorded on her dashboard camera.

According to Ms Xu’s description, the woman looked to be in her 20’s and was rather pleasant looking.

She also spoke fluent Mandarin with a Chinese accent.

Ms Xu thus believes that the woman is a foreigner.

“I asked her for her passport or work permit details. After she heard that I was letting the police handle the case, her expression suddenly changed.

“She seemed afraid. She immediately stood up and left.”

Ms Xu chased ran after her and asked her why she was leaving.

The woman replied that she did not intend to pursue the matter and said that she was unhurt.

“I saw her reach for her phone and make a call after walking for a while. It seemed as if she was complaining to someone over the phone.”

As Ms Xu found the woman’s behaviour highly suspicious, she ultimately decided to lodge a report at a police station nearby.

Related Stories
Man's 'Oscar-worthy' performance in Farmway 'accident' wins him -- a police arrest
Man behind 'Oscar-worthy' Farmway incident was an accountant, earned over S$10K monthly
Woman who threw herself at stationary vehicle along Beach Road was 'drunk and sad'
More About:
accident scam
scam