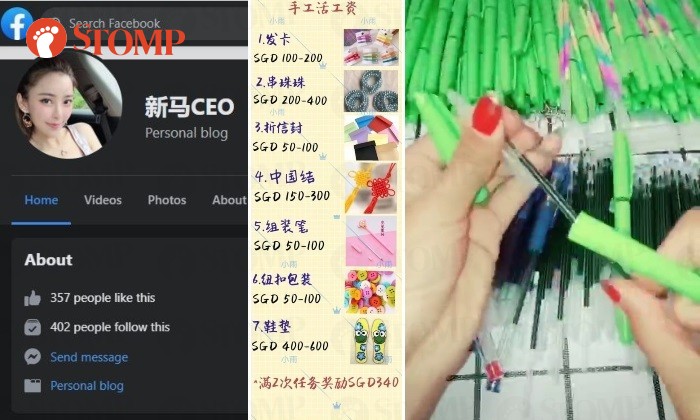 A woman lost her $100 deposit after signing up for a work-from-home job online.

Stomper Maria said she found out about the job from a Facebook group called "Side jobs for stay at home mom".

This led her to the Facebook page of someone who calls herself Xinma CEO.

The Stomper said that after messaging the person via Facebook, she received a link to a WhatsApp number with a Malaysia country code.

She shared with Stomp screenshots of the WhatsApp messages.

Through WhatsApp, she was given a choice of seven jobs, including assembling pens and packing buttons. Each job offered to pay from $50 up to $600. The highest paying job involved insoles for shoes.

There were short videos demonstrating how to do the different tasks.

She was then told to make a deposit of $100 that would be returned only after two jobs were completed. She transferred the money to a POSB account.

"But after putting the deposit, they say goods stuck in customs. Need to wait seven to 15 days," she said.

When the items finally arrived, they turned out to be insoles and not for the pen assembly job she asked for.

She messaged the sender and was told that projects were based on demand. Because of the lockdown in many places in China, the company couldn't ship many products out, but to help her make money as quickly as possible, she was given another job.

When she said she didn’t know how to do the insole job, she was directed to a “teacher” and was instructed to download an app to her phone.

But when she tried downloading the app, she received a warning on her phone that the file might be harmful.

She decided not to install the app and asked for her $100 deposit back, but was rejected as she had not completed the two jobs as required.

When she kept asking for the money, she stopped getting any replies.

"I feel I am being cheated," she said. "And I don’t wish more people to get cheated. The scammer used the $100 deposit to cheat people."

She wants to warn others about such job offers. "Maybe it's real, but do at your own risk," she said.

The police advise taking these precautionary measures to avoid getting scammed: