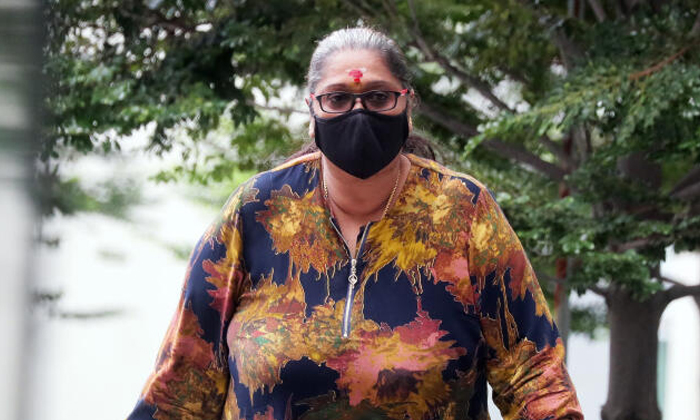 A mother-and-son pair worked together to cheat an elderly man of $113,400 by claiming that they needed money to pay for expenses relating to their "ongoing legal proceedings".

The son, Rajeshvran Veerappan, even called the complainant multiple times and pretended to be prominent members of the judiciary such as Chief Justice Sundaresh Menon and then Principal District Judge Bala Reddy, who is now a senior district judge.

Rajeshvran's mother, Devaki Gopal Muthu, would pretend to be a court secretary called "Sara Goh" to induce the elderly man to transfer money to them.

On Friday (March 4), Devaki, 62, was sentenced to 20 months and two weeks' jail after she pleaded guilty to a cheating charge. Rajeshvran, 38, had been dealt with in court earlier.

The Singaporean pair have made no restitution.

The court heard that Devaki got to know the complainant through her boyfriend, who had bought one insurance plan from him. Rajeshvran also became acquainted with him, through the boyfriend, who has since died.

The mother-and-son pair then conspired to cheat the elderly man.

From about Nov 24, 2016, to about May 12, 2017, they sent text messages and made calls to him, telling him that they needed money to pay for expenses relating to their "ongoing legal proceedings".

Court documents did not disclose details about the "proceedings" and how the complainant was implicated in them.

Deputy Public Prosecutor Samyata Ravindran said: "When the complainant expressed any reluctance, Devaki and Rajeshvran would tell him that he would get into trouble with the courts.

"Both Devaki and Rajeshvran promised that once the legal proceedings concluded, they would pay the complainant back all his money, knowing that they would not do so."

The pair managed to convince him to transfer large sums of cash into their bank accounts on 38 instances.

The prosecutor said the complainant had to borrow from friends and banks to make the transfers.

She added: "He struggled to make the repayments. The complainant was devastated and even expressed suicidal thoughts, especially when his familial relationships were affected.

"His brother refuses to speak to him and he can no longer to visit his ageing mother, who lives with his brother."

Devaki was represented by lawyer Riyach Hussain, who told the court on Friday that Rajeshvran was the mastermind behind the ruse, while his client "merely followed instructions".

Devaki's bail has been set at $10,000 and she was ordered to surrender herself at the State Courts on April 4 to begin serving her sentence.

Related Stories
Man, 71, gets jail for cheating CPF Board into giving him income support for over 10 years
Ex-OCBC financial consultant cheated 5 people of $170k to settle gambling debts
Jail for cop who used brother's info to apply for credit cards and bank loan to pay wife's hospital bills
More About:
scam
court
money