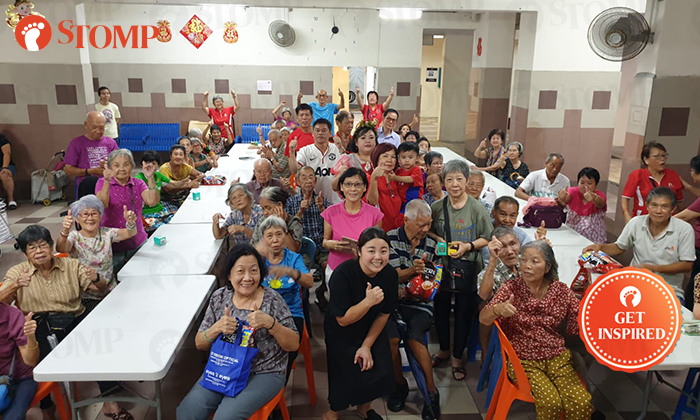 While most celebrate their birthday with friends, a woman decided to spend her birthday by bringing joy to the elderly.

Stomper J first shared the story of Angelia and said: "Kind-hearted Angelia spent her birthday with the aged and brought them joy."

J also contributed photos from the event that was held at Block 42 Circuit Road at about 5pm on Sunday (Nov 10).

In an interview with Stomp, Angelia said: "I worked with the Residents' Committee there and opened up this event to all elderly interested.

"I used to live there and I know that most of the old people live on their own.

"This isn't the first time I've organised such an event and I do it quite frequently.

"I would organise these events about four times in one year, so I would ask the Residents' Committee to help gather elderly interested in going for these events I organise.

"In the past, I used to distribute grocery items to the elderly where they would come and collect the items then return home. That was about six to seven years ago and I've been doing it ever since.

"But I noticed that a lot of these elderly are living alone, so I switch to having buffet meals where they can come and interact with one another.

"Things could happen to those elderly but nobody would know because they are living alone.

"I'm happier whenever I see the elderly people enjoying themselves, being happy and even thanking me at each event."

Feel good to come back to where i grew up. "You have to find what sparks a light in you so that you in your own way can illuminate the world." -- Oprah Winfrey 施比受更为有福❤️ Nobody can do everything, anyone can do something. Spread love & laughter ❤️Bliss ❤️ #sharingiscaring #sg #macpherson

When asked about the buffet, Angelia said: "I paid for the buffet myself but I'm so happy to see the elderly enjoying the food.

"It may be simple food to us but to them, it's considered to be very good since most of them aren't able to have a proper meal most of the time.

"It was my 36th birthday and also the first time we had an emcee hosting an event like this, so we were all very happy.

"My husband and my nine-year-old son went with me to yesterday's event.

"It's very meaningful because in compared to going shopping, where we get something we want, volunteering allows us to bring joy to others.

"I've always wanted my child to be involved in volunteer work and I was glad to see my son helping out.

"I think it's important to start our kids from a young age -- let them contribute and give back to society.

"A lot of elderly people are in need of companionship. It'll be great to let other people know about this so they can do the same thing."

Related Stories
MP Louis Ng reveals the beautiful reason why there are horses in Yishun
Motorists help rider to side of road after he skidded and fell on PIE
2 kind men help troubled driver push his car until it enters parking lot at Adam Road
More About:
get inspired
kind
heroes
inspiring
heartwarming
kudos