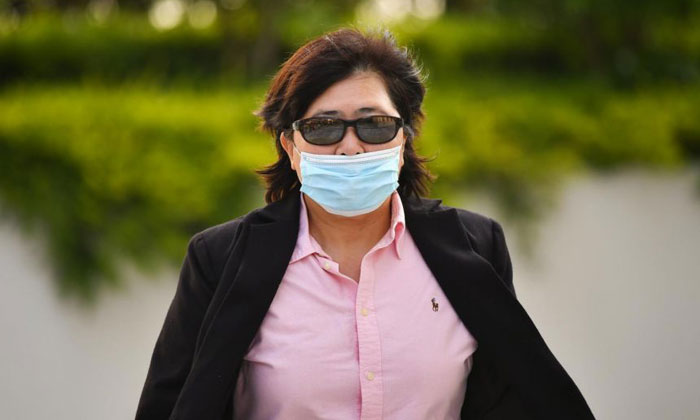 A woman captured on video not wearing a mask at the Marina Bay Sands (MBS) integrated resort is expected to plead guilty to her charges on Aug 12.

Phoon Chiu Yoke, who is now in remand, appeared in court via video-link on Wednesday (Aug 4).

She asked the court for her release, without conditions attached. Alleged offenders can be released on bail before they are convicted.

Phoon, who is unrepresented, also asked for the return of her passport, stressing that she has a "stellar professional record".

The court denied her application on Wednesday given the "egregious nature" of her charges. She continues to be in remand.

Phoon currently faces 22 charges for various offences including multiple counts of failing to wear a mask at public places.

She first appeared in court last year after she allegedly failed to wear a mask over her nose and mouth "at all times" at Newton hawker centre between 7.20pm and 8pm on May 8 during the circuit breaker period.

She left Singapore for Britain soon after that alleged offence.

She returned to Singapore on June 28 last year and had to serve a 14-day stay-home notice at MBS until July 12.

The court had heard that she allegedly left her hotel room at MBS between 8.07pm and 8.23pm on June 28 last year.

Phoon is said to have loitered around various places in the hotel and is accused of failing to wear a mask while doing so.

Following this, she allegedly failed to wear a mask at public places on multiple occasions between Dec 2 last year and May 24 this year - at MBS, outside the State Courts building, at Clarke Quay Central and at Bras Basah Complex.

The 54-year-old Singaporean was out on bail when she allegedly failed to wear a mask at the Mandarin Orchard Singapore hotel around 3pm on June 25.

On July 24, Phoon was handed her latest charge linked to this incident and her bail of $12,000 was revoked. She was then remanded in custody.

Phoon first made the headlines in May this year after she was caught on video not wearing a mask at MBS and arguing with a safe distancing ambassador.

In the video clip, which was widely shared,, she questioned the safe distancing ambassador on whether she had a badge and whom she represented.

The safe distancing ambassador failed to to get Phoon to put on a mask.