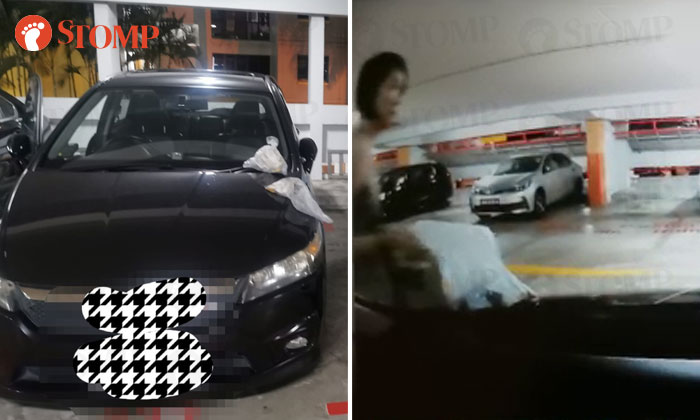 A woman was caught on video tossing rubbish onto another person's car at a carpark in Bukit Panjang last Friday evening (Mar 6).

Stomper Sandy was furious when she saw two bags of rubbish on the bonnet of her car that was parked at Block 177A Lompang Road at about 8.45pm.

"I was so angry and wondering who did that, at the back of my mind I suspected the car parked beside mine as it was not there when we parked past 7pm," she said.

"I took a photo of the rubbish and quickly checked my dashboard camera footage through my phone.

"It took me a good 25 minutes to finally see what happened."

Sandy shared with Stomp footage taken from her in-car camera that caught the woman in the act. She edited it as the other driver took a while to exit the vehicle.

"The driver of the car I suspected of doing this parked beside mine at about 7.25pm but the driver stayed inside for quite a while before she finally came out.

"She deliberately put a plastic bag of rubbish on top of my car at about 7.59pm and threw another one less than a minute later.

"She then walked off without taking her rubbish with her and disposing of it properly.

"I hope the authorities will look into this matter."

Related Stories
Driver and passengers toss rubbish out of car 5 times in Telok Blangah
Driver dumps 2 cigarette butts within 20 minutes along KPE
Queenstown resident greeted by rubbish outside her flat: 'What an eyesore!'
More About:
litterbug
rubbish
inconsiderate
carpark