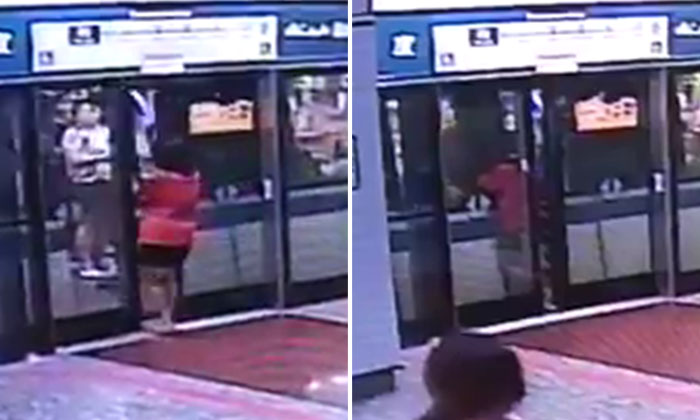 A woman was caught between MRT train and platform doors after she pried the latter open at about 3.30pm on Monday (Aug 26) when she was trying to board a train at Little India Station.

Several Stompers alerted Stomp to a video of the incident that has been circulating on Facebook.

The video was published on a Facebook page, All Singapore Stuff, and has since garnered over 9,900 shares and 4,700 reactions.

The video shows the woman running towards the doors as they are closing. She manages to open the platform screen doors with her hands and gets past. The doors then close behind her and she ends up stuck when she is unable to open the MRT doors.

In response to a Stomp query, Senior Vice President for SBS Transit's Corporate Communications Ms Tammy Tan said: "On Monday afternoon at about 3.30pm, a passenger was seen running towards a Downtown-line train at Little India Station headed in the direction of the Expo Station.

"The platform screen doors (PSD) were already closing by the time she reached. The passenger used her hands to block the PSDs from closing fully.

"As a result, the PSDs started to retract as the system detected the obstruction. Once the commuter managed to get past the PSDs, she attempted to squeeze through the closed train doors.

"At the same time, a staff on board activated an emergency device which enabled the train doors to reopen fully so that the passenger could enter the train.

"For safety reasons, commuters must not attempt such actions. This is extremely dangerous and could result in serious injury.

"It could also result in a service disruption as well as cause damage to public property.”