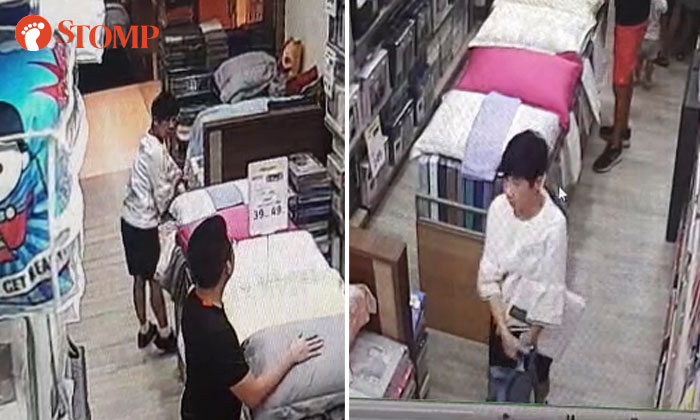 A woman was caught on video walking out of a store at IMM in Jurong East with a bed set tucked under her arm on Sep 23 at about 2.43pm.

Stomper Felicity, who works as a designer for Linen Gallery, the store the woman visited, alerted Stomp to the incident and shared CCTV surveillance footage of the woman taking the bed set.

In the videos taken from cameras at the back and front of the store, the woman is seen wandering around and perusing the linens.

She then picks up a bed set from a stack near the front of the store before casually tucking it under her left arm and pulling her backpack over it.

She does not leave the store immediately but continues to look around and touch items on display before walking out.

"The woman posed as a customer herself and sneakily walked out of the shop with the bed set casually under her arm," Felicity said.

She told Stomp in a phone interview that there was only one staff member on duty that day and she was busy tending to other customers at the time of the incident.

She said that the staff member later realised the bed set was missing after re-arranging the items.

"It is a small store and it is easy to keep track and notice if something is missing," she said.

She has since lodged a police report.

She told Stomp that she hopes someone can identify the woman after seeing these videos.

"I hope with the power of social media, she can be identified and that this will get other store owners at IMM to take notice and be more vigilant."

Related Stories
Woman takes accessories worth $200 from Far East Plaza store while friend distracts owner
Woman chats with cashier -- then takes his wallet from counter at Toa Payoh store
Woman diverts employee's attention at The Arcade store -- then takes dress and places it in big bag
More About:
caught in the act
caught on camera
theft
stealing
shopping mall