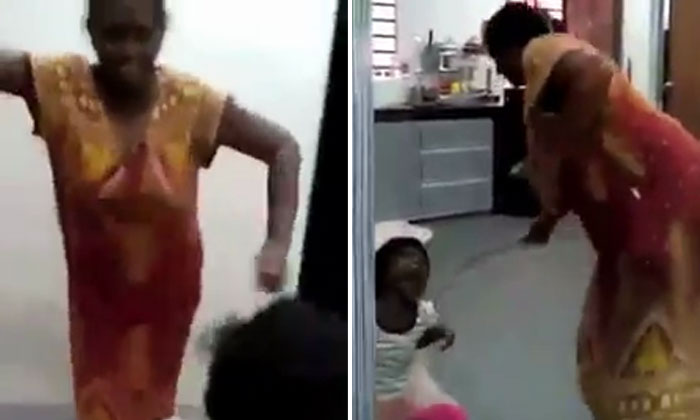 A video of a woman brutally caning a young girl has been circulating online.

The incident is believed to have happened in Puchong Perdana, Malaysia but it is unclear when this happened or who took the video.

"The victim has been saved and the suspect caught," said ACP Mohammad Azlin in a text to The Star.

Stomper Sundar alerted Stomp to the video in which the woman is seen shouting at the girl who is seated at a dining table.

She accuses her of spilling food from her plate while eating and proceeds to rain blow after blow on her with what looks to be a cane.

She is also heard shouting, "die, die, die" in Tamil.

The girl is crying and screaming in pain throughout the punishment.

She clutches at her back and appears in obvious agony as she limps to one side of the kitchen.

The woman removes the girl's shirt before leaving the room.

The girl is then seen breathing heavily, trying to catch her breath.

The woman comes back only to slap the girl a few times before kicking her to the ground and then roughly pulls a new shirt over a head.

In another video featuring the same woman, she is filmed being questioned by a group of people.

She then begins to defend her actions but they tell her that no matter what the child did, she should not have hit her like that.

She says that the girl used to come over to her house to stay but not anymore.

One woman in the crowd accuses her of lying so the men in the crowd ask for the child to be brought there to ask if what the woman was saying was true.

They ask her again why she hit the child like that, but she denies that it was that bad and says she only "swung lightly".

The crowd then start questioning another woman nearby and ask if the woman who caned the child is her mother and if she indeed hit the child.

The other woman says that she was not there when the incident happened so she cannot say for certain.

They then ask her what should be done to her mother.

"Should she be handed to the police or should the crowd deal with her?"

They also ask when the incident happened and point out that the woman is wearing the same outfit she was wearing in the video where she was caning the child.

The crowd appears to be looking for the girl and her parents but nobody knows where they are.