Woman books SQ flight operated by Scoot on SIA website: 'Is it a budget flight?' 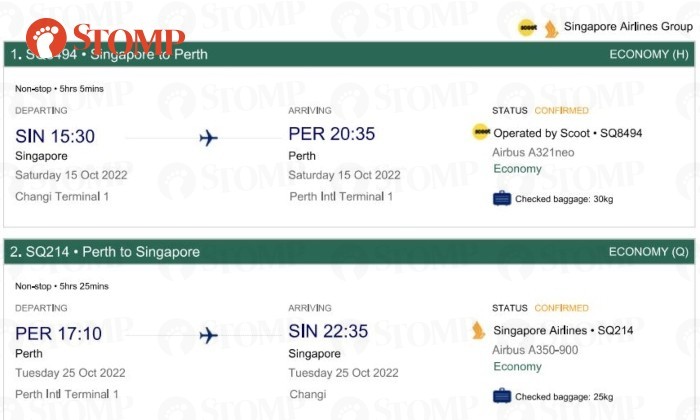 A woman said that when she booked a return flight to Perth using the Singapore Airlines (SIA) website, it did not occur to her that she could have booked a budget flight.

Although the booking stated that flight SQ8494 was "operated by Scoot", the SQ prefix in the flight number led Stomper Jeslyn to think that the flight would be on an SIA plane. Scoot flight numbers usually start with the prefix, TR.

"I felt cheated as one would not expect to fly budget when the booking is done via Singapore Airlines," she said. "Singapore Airlines is a Star Alliance member while Scoot is a low-cost carrier. Codeshare with a budget carrier?"

A codeshare is an agreement between airlines to sell seats on each other's flights. Scoot is a wholly owned subsidiary of SIA.

"I would never book a Scoot flight with Singapore Airlines if I knew it would be a budget flight that I’m taking."

She explained what happened: "Booking was done via Singapore Airlines for a return flight to Perth.

"During the booking process, it says 'operated by Scoot' as part of my itinerary.

"After it is booked, I was planning to select seats for both flights but realised that I couldn't for my outgoing flight.

"My doubt arises. Is it a budget flight? It wouldn’t cross my mind that I would be flying budget as I booked the flight on the Singapore Airlines website.

"I called up Singapore Airlines and was told to contact Scoot instead as SIA is unable to advise anything about Scoot.

"My question was just about in-flight entertainment as I would be travelling with two kids. And the reply that I received from Scoot is just so ridiculous."

The Stomper shared a photo of the e-mailed reply from Scoot, which said in part: "In line with your concern, we would suggest asking for assistance from our ground staff if there's in-flight entertainment (TV screen)"

Most of the reply was about entertainment options at Changi Airport. 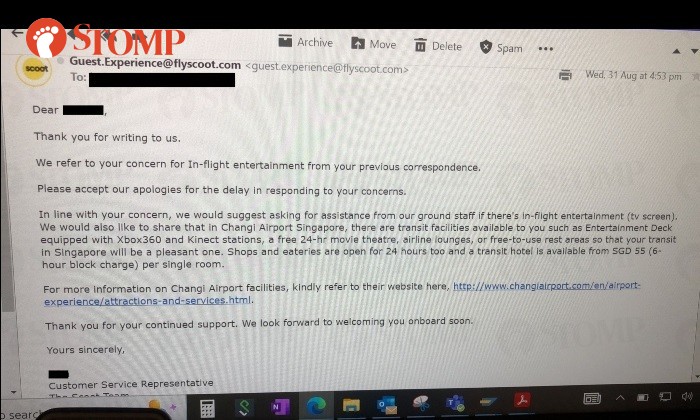 "Singapore Airlines was not providing any information due to 'commercial sensitivity' as they claimed such answers could be found on their website if it is an SQ flight," said the Stomper.

In response to a Stomp query, an SIA spokesman said that the airline sells flights operated by its codeshare partners on its booking platforms.

"SIA’s codeshare partnerships with 31 airlines, including Scoot, offer our customers access to a wider network beyond those operated directly by the Airline," said the spokesman.

When contacted by Stomp about SIA's reply, Jeslyn said she wanted to know what the word "operated" means.

"Is SIA selling Scoot as a budget flight or is the flight just 'operated' by Scoot? 'Operated' means?" she asked.

"At the time of booking, both the prices of the SIA and Scoot flights were the same with different timings.

"I'm asking if it is really a budget flight by checking on the in-flight entertainment."