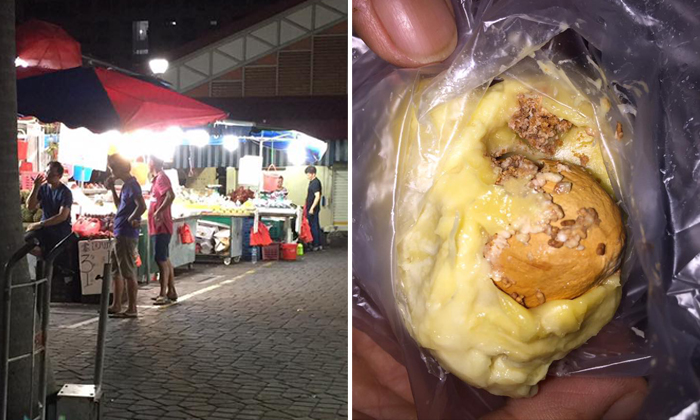 A woman and her family purchased 2kg of durians for $30 at a stall in Chong Pang, Yishun and later allegedly discovered maggots inside the fruit when she got home.

Facebook user Cassandra Neo wrote about the incident in a post dated Aug 2 and said: "The seller kept psycho[ing] us to get $18/kg durians but we ended up buying 2 @ $30 even though his attitude was bad (probably because we didn't get the ones @ $18/kg)."

As she was the first in her family to try the durians, Cassandra said she was the one who made the unfortunate discovery.

She added: "To my horror, there were worms in the durian, faint ~" but that she "didn't notice till the second bite as I felt there were crunchy bits inside the flesh."

The family then returned to the stall to inform the seller about what happened.

His reply, according to Cassandra, was: "一个而已吗, 再选两个咯 (one only, choose another two durians lor)", adding that the seller did not appear apologetic.

Upon asking for a refund, Cassandra shared how one of the stall employees "passed us the $ and said: '拿拿 (take take)'.

"Lol hello, we don't owe you anything. All we want is to get the refund as the incident of having worms already grossed me [out," she wrote.

Related Stories
Don't be a 'blur sotong' shopper, or you could end up with more than you bargained for
Girl vomits after seeing 2cm cockroach in baked rice from Elias Mall stall
Woman enraged when Yishun coffeeshop stall owner says "bo bian" after she bites into cockroach that was in her iced coffee
More About:
disgusting
unhygienic
durian
durians
food
dirty
Yishun
maggots